John Dies at the End
By: Bill Gibron

Who ya gonna call?
Buy It From Amazon
Buy It On DVD
Buy It On Blu-Ray
Buy The Book

It’s been a long time since we’ve heard from horror film director Don Coscarelli. When last he darkened a Cineplex with his dangerous visions, it was in service of the wonderful Elvis-as-ghostbuster classic Bubba Ho-Tep. Unfortunately, since then, his post-Phantasm career has been stalled. He’s tried to get a sequel, the vampire-inspired Bubba Nosferatu, off the ground, but to no avail. Now comes his take on Jason Pargin’s novel John Dies at the End. A wildly incoherent and crazy narrative mess, it’s also a funny and insightful take on the entire indie macabre ideal… and with Coscarelli behind the lens, it’s an insane ride as well.

Dave (Chase Williamson) contacts a reporter named Arnie (Paul Giamatti) hoping to get his surreal story of demonic possession and parallel dimensions out into the public. You see, he and a friend named John (Rob Mayes) got mixed up with a Jamaican drug dealer (Tai Bennett) pushing something called “Soy Sauce.” This “living” pharmaceutical has the unusual byproduct of allowing the taker to see the future, predict outcomes, and read minds. It’s also tied to a deity named Korrock who hopes to use the dope as a means of sending his minions over into our world. Along the way, our hero gets mixed up with a revenge-minded cop (Glynn Turman), an amputee (Fabianne Therese) with an overly smart dog, and a shady infomercial psychic (Clancy Brown) who may or may not be legitimate.

With its collection of oddball characters and reliance on snark over scares, John Dies at the End is hipster horror at its most innocuous. This “too cool for school” scary movie just loves to wallow in the weirdness that Coscarelli and his collection of F/X techs can come up with. There are mutant spiders, slugs with rows of gnarly teeth, and a last act monster made up of goo, human memories, and one large evil eye. In between, we get decapitation, vivisection, zombified limbs, and exploding eyeballs. This is not some hyperactive bloodbath, however. While gory and gruesome, much of this movie’s messier bits are in service of something hilarious, not horrifying.

Indeed, anyone looking for a good shiver should perhaps wander over to the macabre meta world created by Joss Whedon and Drew Goddard in The Cabin in the Woods. John Dies at the End is more in line with the horror movies made in the ’80s, high concept creations where ideas and their execution/implementation were more important than solid characters and storytelling. This is an often-confusing effort which jumps back and forth in time (not to mention dimension) in order to give some meaning to the madness on display. While it doesn’t always work, we are almost always entertained.

Perhaps home video is the best place to discover something as surreal as John Dies at the End. Sitting in front of your flatscreen, remote poised in your hand to rewind and rewatch important plot points and punchlines, the movie’s many idiosyncrasies become more and more self-evident. In fact, it’s safe to say that John Dies at the End passes one of the most important tests of any potential cult film — it stands up to repeat viewings, and offers new insights each and every time. While they may not make more sense the second or third time around, they are still as fun — and flummoxing — to watch. 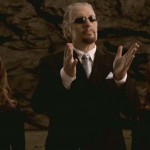 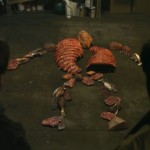 2 thoughts on “John Dies at the End”