G.T.L. baby. Gym, tan, lose your life at the hands of a crazed killer.
Buy It From Amazon
Buy It On DVD
Buy It On Blu-Ray

It’s hard to say what’s more off-putting about Jersey Shore Massacre — that it’s an irredeemably awful film, or that it arrives several years too late. MTV’s Jersey Shore show was a phenomenon when it debuted in 2009. It went off the air two years ago, yet here is an old-fashioned slasher flick inspired by it. The movie still would have been terrible had it arrived while the show was at peak popularity, but it might have been ever-so-slightly more amusing to see a bunch of Snooki/Pauly D lookalikes getting gruesomely offed when their insufferable obnoxiousness was more prominent in the media. Jersey Shore Massacre lists another of the series’ stars, Jenni “JWoww” Farley, as executive producer, which is probably little more than a marketing ploy to connect the film with the show. Whether or not you’re a fan of the real-life self-professed “guidos,” the situation (pun fully intended) remains the same: the movie based on them should only be viewed under threat of grievous bodily harm. And even then, you should give your choice some careful consideration.

The story — and I’m using that term loosely — involves a group of young women setting out for a beach vacation. The only one worth singling out is Teresa (Danielle Dallacco). She’s the least trashy of the gals, and anyone who’s ever seen a slasher movie knows what this means. When they get to their beach house, they discover that the pot-addled landlord (played by master thespian Ron Jeremy) has inadvertently rented it to another party. Fortunately, Teresa’s mobster uncle has a massive, fully-loaded cabin out in the Pine Barrens, so they go there instead. They are greeted by a creepy next-door neighbor, a backwoods giant named Edgar (portrayed by an actor billed only as “Bigfoot”). The next day, Teresa and friends put on their most revealing swimwear and drive to the beach, where they meet a group of muscleheads who are all dumb as posts. Actually, that’s a cruel and unfair assessment. I’ve seen posts smarter than these guys. Everyone ends up back at the cabin, where they proceed to get drunk, hang out in the pool, and “smoosh.” Then someone begins killing them one by one.

If there’s a way to make this material work, which is debatable, it would be to take an over-the-top, self-knowing tone, kind of like Sharknado or any of those other cheesy Saturday night movies made for the SyFy channel. Jersey Shore Massacre tries to do that for the first 50 minutes, but fails miserably. The thing is, it’s impossible to parody Snooki, The Situation, and the other Jersey Shore stars because they’re already parodies. The cast members of the MTV show were essentially actors playing outsized versions of themselves and exaggerating cultural stereotypes to the hilt. The movie, therefore, never generates any laughter, or even interest, because it just can’t outdo that. We are instead presented with a lot of unrecognizable actors trying to imitate annoying people who were, in turn, mugging to the MTV cameras. This makes for some spectacularly poor acting. Not even the relatively restrained work from Bigfoot can inject life into the proceedings. Then again, this particular performer has trouble spitting out the simplest of lines, such as, “Do you want to try my sausage?”

After spending an excruciatingly long and dull amount of time watching these simpletons meet, party, and flirt, Jersey Shore Massacre finally starts to live up to the third word in its title. And, surprisingly, it becomes even more intolerable than it already was. The movie abruptly turns into a Saw sequel, with some of the most ghastly, stomach-churning violence ever to grace an inexplicably R-rated motion picture. The guys endure horrific torture, but the women get it worse. One especially offensive scene shows an extreme close-up of a woman’s bare breasts being repeatedly slashed with a cleaver. As in, we see them being torn open and virtually cut off from her torso. She’s not the only one to endure such an indignity. When Jersey Shore Massacre isn’t trying to titillate the audience with breasts, it’s trying to repulse them with shots of breasts getting mangled or mutilated. There is an odd hated of women running underneath the surface, as evidenced by the sexually-charged violence against them. For this, we can thank director Paul Tarnopol and his co-screenwriter Goldeneye. (What is with the names of people who worked on this movie?) They have imagined some appalling ways for human beings to die, without creating any sort of suspense or reason to care about any of it.

Jersey Shore Massacre is neither funny nor scary. It’s garbage, but not the fun kind of garbage that inspires cult followings. In fact, it doesn’t deserve to be called a movie. It is a gigantic black hole, one that sucks 88 minutes of your life away, along with any hope you may have had of being entertained, even in a cheap, throwaway fashion. 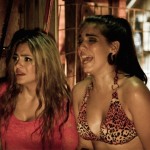 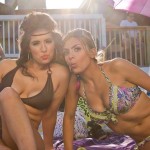