Get Off My Lawn!

The payoff isn’t worth the setup. Along with outtakes that are among the funniest moments of the film, the end credits of Jackass Presents: Bad Grandpa show some of the detailed preparations that went into creating its labored scenarios. Hidden cameras in various shops, clubs, and on the street, camera people hiding in boxes, and hours of makeup are wasted on covertly filmed bystanders that give lackluster reactions to the jokes being played on them. That is, if the joke is even on them.

Bad Grandpa features rabble-rouser Johnny Knoxville as Irving Zisman – an elderly character that has appeared in bits in the “Jackass” TV and film series. The spinoff sends Zisman on an adventure that mixes the physical stunts Knoxville is known for with the guerrilla filming tactics of Sacha Baron Cohen’s Borat and Brüno. Much like the Baron Cohen-starring vehicles, there’s a loose road trip narrative woven into a string of staged set pieces ambushing an unsuspecting public. But unlike those better films, the tricks are tame and there is a complete lack of social commentary exposing the prejudices of its subjects. Though it generates laughs, including a few big ones, Bad Grandpa exists in a comedy purgatory between gentle bodily tomfoolery and tired gags that are crude but feel safe.

Zisman is ready to mingle after the death of his wife Ellie, whose corpse is played briefly by Catherine Keener (yes, that Catherine Keener). Apparently she had more scenes cut for time, but those are the chances an actor takes when they work with auteurs like Terrence Malick or Bad Grandpa helmer Jeff Tremaine.

Dashing the octogenarian’s dreams of debauchery, Zisman’s daughter dumps his grandson Billy (Jackson Nicoll) on him before she’s sent off to jail. It’s now up to Irving to transport the eight-year-old from Nebraska to his deadbeat dad in Raleigh, North Carolina. What’s surprising is the amount of time the film commits to massaging this plotline into something the audience actually cares about. Not to the point of genuine emotional investment, but just enough for us to imagine Irving and Billy as real people. The strategy doesn’t work, and the movie’s transitions from constructed story to prank and back again grow repetitive and strained.

There are punchy moments of hilarity involving an airbag, a soda machine, and an unfortunate accident in a diner, while a spirited Nicoll delivers some funny lines on unknowing folks (though there is a noticeable delay as words are fed to him via earpiece). Problem is nothing really shocks. Bits in a bingo hall, a male strip club, and a biker bar go on way too long and leave us waiting for an exclamation point or punch line, but instead just end unceremoniously.

From an irate convenience store worker to buff strippers, it seems Knoxville is just waiting for someone to completely fly off the handle and deck him… or just do something. But he only irritates to the point of cross looks and a few harsh words. It’s probably a combination of people’s aversion to physically accosting an 86-year-old man and poorly planned gags that don’t push things far enough. His stunts barely register, either. Flying though a store window or drinking the ink out of a bingo marker inspire only agape mouths and slightly widened eyes from observers.

The closest Bad Grandpa comes to a fully-realized ruse is the final setup at a toddler beauty pageant. Interviews of a contestant and her mother suggest an unhealthy dedication to the contests (which isn’t anything we haven’t seen before). By the time Billy takes the stage in drag and performs a striptease, the stunned looks in the crowd of parents suggest their hypocrisy; as if they’re completely offended by the shallowness and exploitation. But this revelation is stumbled upon rather than intended.

As is to be expected with an episodic sketch comedy, the laughs are hit and miss, but one based on shocks and alarming pranks should have you in disbelief of what you’re seeing. With Bad Grandpa it feels like we’ve seen it all before. And better. 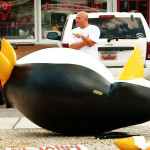 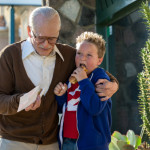 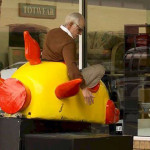