The wind's not the only thing that blows...
Buy It From Amazon
Buy It On DVD
Buy It On Blu-Ray

Eighteen years ago, fledgling director Jan de Bont used the newest cinematic technology, something called “C…G…I…” to tell the tale of two bickering storm chasers/tornado researchers and their quest for the mother of all maelstroms. Starring Bill Paxton and Helen Hunt, Twister went on to earn nearly $494 million worldwide, pretty much guaranteeing a sequel. Lucky for us, the movie gods smiled on the simple audience member and we weren’t treated to Twister 2: Electric Boogaloo.

No, instead, we get the late-by-two-decades Into the Storm, a film similar to de Bont’s baby in several significant ways. First off, it deals with an angry storm chaser (Matt Walsh) looking for the mother of all maelstroms whilst bickering with his science guide (Sarah Wayne Callies) over where they should go next. Eager to ride through the middle of a tornado, the duo are constantly complaining to and about each other. We also get intriguing moments of computer generated chaos, mother nature given a helping hand via a motherboard spitting out various photo-realistic renderings of total destruction. There’s even a floating cow if you look carefully enough.

We also have wholly unnecessary subplots, including a local school vice-principal (Richard Armitage) trying to get his sons (Jeremy Sumpter, Nathan Kress) to stop slacking off and videotape that day’s graduation proceedings — which just so happens to occur during a massive Category 5 storm. There’s also a couple of Jackass wannabes (Kyle Davis, Jon Reep) who see the oncoming turbulence as perfect fodder for their YouTube-driven fame. Toss in a popular gal (Alycia Debnam-Carey) who needs help with her video resume for an internship and a novice cameraman (Max Deacon) who’s freaking out over his various brushes with danger and you’ve got the dull as dishwater participants in this low-budget disaster.

Yes, Into the Storm has some bad-ass moments of mass destruction. It also exploits the stories of all those people who we see paraded out by the news media, their entire lives lost as a twister takes apart their home and personal possessions. Frequently, we find ourselves deep in the aftermath of these tornadoes, our eyes looking out over the destruction and feeling thankful that it’s not us who has to rebuild and start anew. On the other hand, director Steve Quale and screenwriter John Swetnam do very little with this harsh reality. Instead, it uses these sequences as sidetracks, ways to avoid more expensive CG action or genuine character development.

Sadly, action is all this film has going for it, so if you don’t mind spending 79 minutes of clichéd boredom to enjoy 10 to 15 minutes of wind and wreckage, more Doppler to you. If, on the other hand, you’d like a reason to be invested in these people, to feel a connection that allows you to feel for their situation and the terror they are facing, you’ll need to look somewhere else. Everyone here, from Armitage’s stoic school official to Callies’ wisecracking meteorologist, is one-dimensional and dim. We get their desire to do their job and help protect the public. Anything else — like his widower status and her single motherhood — is just boilerplate window dressing, added to provide depth while delivering none. 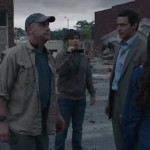 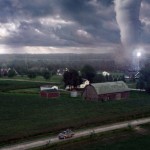 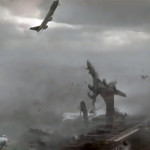