Into the Inferno
By: Valerie Kalfrin

A person in silver walks on black soil, precariously close to a raging red river of lava — a shot that would be at home in any science-fiction film. Yet this spectacular sight comes from an active volcano on Earth in acclaimed director Werner Herzog’s latest documentary, Into the Inferno, a film that meshes the wonder of science with the fascination and mysticism born from living so close to the fire.

Herzog has long followed adventurers. His dramas Aguirre, the Wrath of God (1972) and Fitzcarraldo (1982) depicted the fervor and madness of jungle explorers while becoming expeditions themselves through scope and novelty. Yet his admiration is clear in documentaries such as Grizzly Man (2005), Encounters at the End of the World (2007), and Cave of Forgotten Dreams (2010).

While filming Encounters at the End of the World in Antarctica, Herzog met “a strange and wonderful tribe of volcanologists,” including Clive Oppenheimer from the University of Cambridge. Oppenheimer serves as a guide and interviewer for much of Into the Inferno, which showed at the Telluride Film Festival and is now available for streaming through Netflix.

The two’s warm rapport appears in footage soon after their meeting years ago on the edge of Mount Erebus, the southernmost active volcano on Earth. Oppenheimer confides that the scientists thought the film crew might recklessly lower themselves toward the magma. He quickly realized that regardless of passion, Herzog isn’t foolhardy.

Herzog notes he’s “fond of the volcano,” but the shifting surface within reminds him of the impermanence of life. Into the Inferno highlights fascinating science, such as workers who track seismic readings to warn Indonesian residents of imminent eruptions, but viewers who wish to know more about what makes a volcano tick would be better served watching NatGeo or the Discovery Channel. Herzog and Oppenheimer are curious about “the magical side” of volcanoes, specifically cultures who live with these smoking behemoths and form belief systems around them.

Iceland is rife with volcanic eruptions, described in the country’s mythical poetry as falling stars and apocalyptic visions of pagan gods. Indonesia’s Mount Marapi and its dozens of neighbors have ethereal names, such as The Night Market of the Ghosts. Mount Paektu, on the border of North Korea and China, is said to be the mythical birthplace of the Korean nation — something that the late Kim II-Sung co-opted for the nation’s Communist propaganda.

Then there’s the Vanuatu archipelago east of Australia, where one tribe believes dead ancestors live inside a volcano and another tribe worships a fictional American GI said to use a volcano as a spiritual portal. (He promises to return, the tribe says, bearing consumer goods like chewing gum and Cadillacs.)

The people in these areas are fascinated by the visitors. “Why [sic] do these people want to do with that fire?” one chief says. But the filmmakers are reverent, deferential. There’s no winking at the audience, as if to say those who haven’t lived with these lava-spewing giants have no place to judge.

Instead, the film crafts a sense of awe and humility by peering at the roiling lava, its terrifying beauty and destructive aftermath, which viewers can’t help compare to volcanologists as big as ants on crater rims and the people living in these mountains’ shadows.

“This fire wants to burst forth,” Herzog says at one point, “and it could not care less about what we are doing up here.” 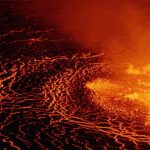 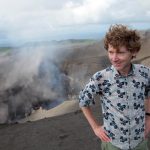 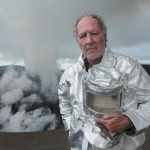 One thought on “Into the Inferno”