In the Heart of the Sea
By: Blake Crane

This Blows.
Buy It From Amazon
Buy It On DVD
Buy It On Blu-Ray
Buy The Book

Inspired by the story that inspired the story of Moby-Dick, In the Heart of the Sea is routine with its tale and precious with its traumas and commentary, zapping the occasionally visually striking film of vitality. Fish stories are known for their embellishments, and though this one has elements of a fantastic yarn, the film’s mechanical structure makes it feel hokey instead of harrowing.

In 1820 Nantucket, whaler Owen Chase (Chris Hemsworth) is passed over for captaincy of the Essex, with command of the vessel given to uppity, pedigreed George Pollard (Benjamin Walker). Agreeing to go on a long voyage as first mate, Chase sets out with Captain Pollard and crew – including young greenhorn Thomas Nickerson (Tom Holland), to hunt whales for their oil. After more than a year at sea with little luck, the Essex charts a course for remote waters rumored to be full of prey. Discovering rich hunting grounds, the seafarers gleefully row into a pod of whales, ropes and harpoons at the ready. But the sea is angry and revenge is a beluga, in the form of a huge whale that attacks, destroys the Essex, and leaves the men adrift.

Breaking up the high seas adventure is a framing device set three decades later, which has the last surviving crew member, a now haggard Tom Nickerson (Brendan Gleeson), recounting the story to Herman Melville (Ben Whishaw). The author is eager to dip into his inkwell; Nickerson’s more interested in his whiskey bottle (close-ups provided of each for emphasis). While Gleeson and Whishaw sell the anguish and the ambition, respectively, the ratio of telling to showing is skewed a bit too much to the former. The narration is also used to obscure some of the nasty bits (often referred to as “atrocities”).

There are surprises along the way, but there’s not enough time spent with the Essex or its crew to make the in-the-moment drama credible. Director Ron Howard breezes through what was surely an arduous, fruitless year at sea and the men seemingly are no worse for the wear, looking healthy and chipper when they reach fertile waters. But mere days after the huge whale strikes, the crew are fully bearded with clothes reduced to rags. There must’ve been some killer amenities on that boat.

The passage of time is a consistent issue, with the number of days at sea tallied on-screen and only little snippets providing the current levels of morale and starvation. Events don’t evolve into a palpable struggle for survival, coming across as cinematic necessity. There’s a storm, surface-level friction between Chase and Pollard, sweeping shots of the sea and well-timed attacks from the great white whale. It obliterates the Essex, and in no time at all it’s more than a month later. As soon as the men in lifeboats spy land, the whale attacks again. That’s a pretty callous and calculating mammal.

Most of the underwater and whale gone wild scenes look good, the Essex feels like a solitary ship in a vast sea, and 1800s Nantucket comes across as authentic. At times though, the film’s digital look is quite ugly and certain effects are rough. When Chase and crew row out to harpoon a whale, it appears as though they’re rowing straight at a green screen while production assistants are tossing bucketsful of water at them from off-camera.

There are also inconsistencies in discourse and a shoehorning of messages meant to be relevant to a contemporary audience. Chase’s morals regarding whale hunting seem to change awfully quickly when faced with a desperate situation, a moment of quiet reflection when young Thomas is baptized in the blood from his first whale kill is undone by humor in the following scene, and there’s forced congruence with the depletion of whale resources and modern issues. Just listen to how the word “oil” is emphasized.

When all is said and recounted, Nickerson literally tells Melville, “Well, you’ve got your plot.“ In the Heart of the Sea has its plot, too, but does little to make it come to life. 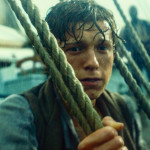 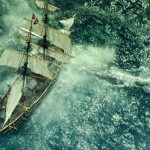 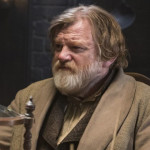