The Hunt
By: Blake Crane

No Talking in Church!
Buy It From Amazon
Buy It On DVD
Buy It On Blu-Ray

In today’s never-ending news cycle we’re inundated with a steady stream of hate speech and fearmongering from the highest halls of government to the Twitter feeds of irrational folks attacking pseudo-celebrities for their choice of wardrobe. Most level-headed individuals have the ability to wade through the insanity that grinds legislators and reality stars through the relentless political or gossip machine, but many get swept up in the madness. And in the end that’s all that matters as politicians battle to get elected or vapid idols try to increase sales of their latest fragrance. But what if ugly mob mania is focused on one of us average Joes? It can be truly terrifying and unravel the very fabric of our life.

This is the dilemma at the heart of The Hunt, when a spontaneous and unfounded accusation is readily accepted as fact, sparking a wildfire of emotions and threatening every aspect of a well-meaning man’s existence. Lucas (Mads Mikkelsen) lives in a quaint Danish village and works at the local kindergarten where he’s well-liked by the kids and fellow staff. Life isn’t perfect, as he’s gone through a painful divorce, but he still has a loyal dog, his good buddies, and his estranged son Marcus (Lasse Fogelstrom) is coming to live with him. He’s even ready to take a romantic plunge with co-worker Agnes (Anne Louise Hassing).

But any anticipation for happier times is drained when the young daughter of Lucas’ best friend Theo (Thomas Bo Larsen) accuses him of sexual abuse — which follows an uncomfortable encounter where Lucas acts wholly appropriately, but ends with Karla (Annika Wedderkopp) impulsively telling Principal Grethe (Susse Wold) that Lucas exposed himself to her. Grethe confronts Lucas, convinces herself that children don’t lie, and quickly moves to notify parents and authorities.

One of the most refreshing aspects of The Hunt is its focus on societal dynamics rather than intricately plotted mystery. Lucas’ innocence is never in doubt, allowing us to more readily put ourselves in his shoes, uncomfortably observing as the hysterics of townspeople rise. An investigator asks Karla frustratingly leading questions, and when Karla tries to recant her story later, her mother is so far gone in protective mode she works to convince her daughter that this did indeed happen. No melodrama or manipulation is needed to guide us through this harrowing Everyman journey, where he’s completely hopeless against the pitchfork-and-torch crowd. This struggle is apparent through the actions of Agnes, who upon first hearing the accusation laughs it off as completely ridiculous, but after several days of whispering and innuendo asks Lucas pointed questions.

Director Thomas Vinterberg and his co-screenwriter Tobias Lindholm manage the rising tensions skillfully, without a forced sense of urgency. It’s a natural building from quiet stares to a physical assault that leaves Lucas bloodied and limping. The subject matter isn’t new to Vinterberg, who staged a similar situation in his 1998 film The Celebration, in which a father is publicly accused of abuse by his adult son. Part of the Scandinavian Dogme 95 movement, the earlier film utilized handheld cameras to evoke a more primitive home-movie feel, but The Hunt is far more polished and carefully observes the village, its people, and the surrounding wilderness as an unforgiving amalgam. Also perfectly measured is Mikkelsen’s performance, which is deeply affecting without being showy, and which bubbles over believably in a heartbreaking outburst against Theo during a church service.

We feel Lucas’ physical and emotional pain and are invested in his well-being in the face of misguided vitriol. Everyone is so focused on their target, there’s no introspection or attempt to discover the real roots of the indictment — including the alienation of Karla by her parents, which drives her to seek the attention of Lucas in the first place, and the one-sided “investigation” by Principal Grethe. Even though the truth is on his side, there is a constant anxiety suggesting Lucas will never be vindicated. The film concludes with an epilogue that may seem out of place at first, but it ultimately sends a clear message that regardless of the truth, a lie like this creates a stain that will never be washed completely clean. 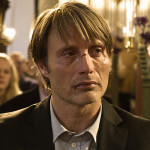 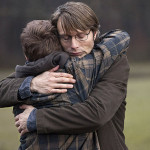 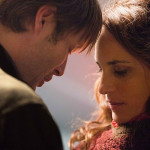 2 thoughts on “The Hunt”