They’re making another Conjuring movie?
Buy It From Amazon
Buy It On DVD
Buy It On Blu-Ray

Housebound is a rare post-modern horror-comedy that achieves its laughs and its scares organically. Digs at the haunted house genre don’t come at the expense of tension and are made with appreciation rather than spoof-like derision. References are familiar without being forced or plainly stated. With his debut feature, writer/director Gerard Johnstone displays a sensibility similar to the early works of Sam Raimi and fellow New Zealander Peter Jackson, though not quite as madcap. He achieves a balance of zany and genuine that weathers tonal changes and big reveals that don’t (completely) cheat.

Kylie (Morgana O’Reilly) is busted when her plan to steal an ATM goes comically awry. Not wanting to put the repeat offender through a system that’s failed her, the judge sentences Kylie to house arrest in her childhood home. This would be difficult for any woman in her early 20s, let alone one with such hostility. Her icy disposition only intensifies around her well-meaning yet scatterbrained, blabbermouth mother Miriam (Rima Te Wiata) and Miriam’s impassive, near mute boyfriend Graeme (Ross Harper). Miriam believes their creepy old house is haunted, which is just another thing for Kylie to roll her eyes at. But when things start going bump in the night, Kylie becomes a believer. Luckily(?), Amos (Glen-Paul Waru), the local security guard who monitors Kylie’s house arrest ankle bracelet, thinks himself a qualified paranormal investigator and is eager to assist.

To know much more of the plot beyond that would be a disservice to the experience of it. Of course, the house has an unsavory backstory that is revealed piecemeal.And oOf course, that backstory involves mysteries and suspects. Thankfully, Johnstone puts forth a strategy to handle the rigmarole without falling victim to formula. Some of the developments are absurd, but they’re certainly unique, and their outrageousness is part of the point. The road to the reveals is questionable in spots, with a couple of expository speeches and a slightly protracted investigation of a character whose name may as well be Red Herring, but it’s only a temporary loss of momentum before the nutty final act.

O’Reilly and Te Wiata keep us invested with characters that form the core of the story, rather than just being faces that react to the craziness around them. Te Wiata strikes a balance between an annoying and endearing mum. O’Reilly successfully transforms from head case to heroine as the stakes are raised and the mystery unravels. It’s a subtle shift thanks to nuance that softens her disposition without completely smoothing her rough edges. She’s also not the standard issue woman in peril. When the light flickers in the dank basement, she’s not terrified, she’s annoyed. When a creaky closet door seemingly opens on its own, she takes it off the hinges. It’s only when the crawlspace door behind it swings open that she takes heed.

With the focus not just on the haunted house but the people who inhabit it, Housebound’s punches and punchlines hit a little harder. Johnstone understands that things resonate more when happening to real people instead of mindless sketches. Haunting movies are almost exclusively about sins of the past coming home to roost, and the relationship between Kylie and Miriam illustrates that just as well as any specter. Throw in the character quirks and genre tweaks that keep us guessing and, more importantly, keep us entertained and we’re treated to something that’s delightfully unexpected.

Housebound won’t terrify you into losing sleep or split your side with its hilarity, but it will make you recoil with surprise and appreciate its wit. One particular scene during the climax puts three characters in a room where they reminisce about their history. The moment goes from tender to ridiculously comedic to potentially tragic in short order, with all three disparate notes hitting their mark. That’s rare. 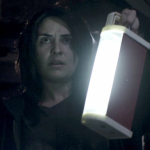 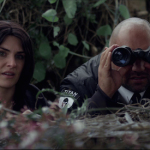 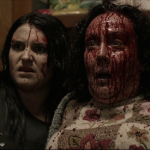