More like ZZ NOT!
Buy It From Amazon
Buy It On DVD
Buy It On Blu-Ray

They say comedy is all about timing. So it would figure, logically, that a movie dealing with temporal displacements and reversals would be a true side-splitter. The good news is that the original Hot Tub Time Machine was an ’80s throwback hoot, an attempt to reduce the entire Reagan Era into a collection of dead-on comic deconstructions. The bad news is that the sequel, Hot Tub Time Machine 2, sucks. It’s more or less a complete disaster, an unfunny combination of dick jokes, dick-oriented jokes, and jokes about dicks. It’s also anchored by a lead character so horrible, so wholly irredeemable, that you can’t root for anything other than his painful vivisection.

When last we left our jacked Jacuzzi explorers, Lou Dorcher (Rob Corddry) had gone from incredibly angry loser to billionaire bastard, taking credit for the music of Motley Crue (now known as “Motley Lou”) and Google (aka “Lougle”). His best buddy Nick Webber (Craig Robinson) is also a highly successful musician, having discovered that stealing other people’s songs before they can record them leads to a big bundle of cash and a slew of Grammys. Lou’s son, Jacob (Clark Duke) has been reduced to the role of butler in his dad’s life, while former compatriot (John Cusack, wisely skipping this installment) is off on a “spiritual quest.”

As we soon learn, Lou has pissed off almost everyone he knows, including former best friend Gary Winkle (Jason Jones), his put-upon wife (Collette Wolfe), and a thoroughly disgruntled Lougle employee (Kumail Nanjiani). So when he is shot during a party, everyone is a suspect. Nick and Jacob decide to try and save Lou, and they head back to the title device to go back in the past and stop the killer. Instead, they end up in the future, where sonny boy is now the success, his father is an outright failure, and the former Billboard chart topper is now a nobody nostalgia act. With the help of Lou’s nephew, Adam (Adam Scott), they try to solve the whodunit.

You’d think with all the sleuthing to be done, Hot Tub Time Machine 2 wouldn’t have enough opportunities to work in numerous jabs at genitalia. After all, the movie has to find a way to unravel its mediocre mystery before the run time hits 88 minutes. That backhanded allusion to Back to the Future 2 is actually apropos, since the screenplay by Josh Heald (who wrote the original) cribs mercilessly from Marty McFly’s follow-up. From the rags to riches dynamic to the supposedly funny future shock (Smart Cars are actually smart and have feelings that can be hurt!) he can’t help but borrow from his betters.

But since Lou is our lead, and he is described by his pals as a virus that infects and poisons everything, he’s the make or break element for our enjoyment here. Find his crude, crass, antisocial actions entertaining, and Hot Tub Time Machine 2 will be another bong-hit hit. Believe him to be a blight on society and everyone in it, and you’ll wonder why someone hasn’t pulled the trigger on this tool ages ago. A little of Lou goes an awfully long way, so this sequel has decided he should be the center of everything. Nick and Jacob are mere extras in their own story, reduced to playing runner-ups to our anti-hero’s unpleasant anarchy. The results reek.

There’s a smattering of laughs here and there, but nothing smart or sustained. Everything is aimed at the ball sack or lower, with director Steve Pink channeling his inner Farrelly brother most of the time. The gross-out comedy has been DOA for a while, but Hot Tub Time Machine 2 still believes there are laughs in such sleazy scatology. At least the first film found a way to turn a group of middle-aged men with useless existences into a case of raunchy redemption. Not even an appearance by the genius that is Crispin Glover could save this sad second installment. 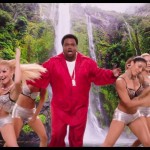 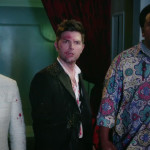 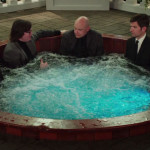