Zero points for Gryffindor.
Buy It From Amazon
Buy It On DVD
Buy It On Blu-Ray
Buy The Book

Ig Perrish (Daniel Radcliffe) is a pariah in his small Pacific Northwest logging town. Everyone is convinced he’s responsible for the murder of pixie girlfriend Merrin (Juno Temple), and the media hounds him wherever he goes. Living in his own personal hell with his beloved dead and himself accused, one day Ig awakens to a set of horns growing from his forehead. The horns aren’t just for decoration or guilt manifestation; whenever Ig comes into contact with others, they lose their inhibitions and confess their dark secrets, sometimes even acting them out. Seems like a handy power to have when searching for a murderer.

Based on the 2010 novel by Joe Hill (son of Stephen King), Keith Bunin’s screenplay is burdened by a glut of exposition and includes several expendable moments and scenes that are treated as beyond precious. Moments of cutting loose by the townsfolk in Ig’s presence get repetitive and feel tame considering the subject matter and Aja’s track record with extremes that include the New French Extremity queasiness of High Tension and the B-horror glee of Piranha 3D. Town hussy Glenna (Kelli Garner) really just wants to eat donuts, tough cops are latent homosexuals, and so on.

The folly distracts from meatier divulgements, like the gross lack of support Ig receives from his parents (Kathleen Quinlan and James Remar), or his distant relationship with drug addict brother Terry (Joe Anderson). The parental distain is played for broad comedy, while the payoff with Terry is shallow reinforcement of brotherly bonds – and also an excuse for Aja to play with horror makeup, lenses, and lighting during a bad trip. Similarly, potential conflict with a waitress (Heather Graham), who’s lying to authorities to get on TV, is wrapped up by giving the bad-CGI snakes slithering around Ig something to do.

Former boy wizard Radcliffe wears Ig’s weariness well, but occasionally has trouble with his American accent and the affected hipster-speak dialogue, sounding a bit like a 1940s Brooklyn gangster suffering through a cold. His moping is worthy of Shakespearean tragedy and doesn’t mesh with tonal fluctuations that take us from dreamy flashbacks showing his childhood courtship of Merrin to his current state of being. Temple has a long streak of playing the approachable tart and she’s just as good at it here as anywhere else. As her grieving father, the ever-reliable David Morse grounds Horns with actual anguish stemming from the loss of his wife to cancer and the murder of his daughter. He only gets a couple of scenes, but if this was a story about this guy wresting with his inner demons, we may have something. Instead, he’s used to provide Ig with encouragement (and a pivotal object) when needed.

Potential with the premise is wasted with a kitchen sink approach that acts as a wet blanket, extinguishing heat from the drama and the fantasy. The contrast between the quaint and the bizarre, including an abrupt blood-soaked finale, is a noxious mixture intent on bashing us on the head with on-the-nose whimsy. “Personal Jesus” blares on the soundtrack because, well, “Personal Jesus” – and it sounds cool when watching a guy sporting demon horns walk away from a smoldering building in slow motion. The allegory is thin at best, and not even the Bible verses referenced in carefully framed close-ups of license plates deepen its significance. Perhaps the only interesting subversion is a cheeky poke to the fundamentalists convinced that Harry Potter is a demon. 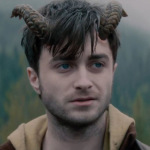 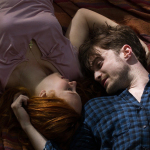 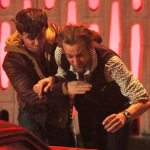