The Homesman
By: Paul Brenner

"Come on, boys. Men in Black 3 wasn't that bad!"
Buy It From Amazon
Buy It On DVD
Buy It On Blu-Ray

In one of the most shocking moments from John Ford’s epic western The Searchers, John Wayne, who is looking for his niece that has been abducted by the Comanches, comes to a cavalry outpost, where two pioneer women have been reclaimed from the Indians. Both woman have descended into madness by their abductions; one woman clutches a rag doll. Not having found his niece, Wayne leaves the post but not before he turns back to the mad women as the camera tracks in to Wayne, who glares at these white women with a look of disgust, loathing, and racial hatred. For John Ford, these women were monsters, rejects of the American civilization that was bringing order and ritual to the wild, chaotic west, mostly through the civilizing presence of a pioneer stock of hardscrabble women.

In Tommy Lee Jones’s laid back The Homesman, this Fordian ethos is turned on its head, featuring pioneer women who crack under the strain of an unrelentingly bleak and uncaring Nebraskan landscape. Their stark state is a lonely one, the women in soul-killing marriages to heartless, cruel, and stupid men. Unfeeling men that cannot grasp the situation. A character remarks, “There’s been some trouble amongst the women, hereabouts.” That’s an understatement. Here, women’s psyches shatter under the strain. Arabella Sours (Grace Gummer) is in a catatonic state, clutching a rag doll similar to the rag doll of the crazy woman in The Searchers, after three of her children have died of disease. Theoline Belknap (Miranda Otto) discards her newborn child in an outhouse after the family farm fails, and Gro Svendsen (Sonja Richter) is a raving lunatic who is so off the deep end that she appears to need an exorcist. Their husbands are all self-centered, uncaring pricks who refuse to take care of their wives. This leads the well-meaning but ineffectual town preacher (John Lithgow) to propose carting off the lunatic women back “east” to Iowa, where the wife of a town minister (Meryl Streep, overflowing with sincerity and kindness) will care for them.

Offering to transport this collection of mad women is local town spinster Mary Bee Cuddy (Hilary Swank, in her finest performance since Million Dollar Baby), a straight-laced, strong, and indomitable frontier woman of the John Ford mold. Coming upon a well-worn reprobate, George Briggs (Tommy Lee Jones), a claim jumper strung up on his horse and about to be hanged, she rescues him on the promise that he will accompany her on her dangerous journey eastward.

What could have been an umpteenth remake of The African Queen is quickly drained dry into a parched and cold duet. There is no love lost between Mary Bee and Briggs, except a grudging acceptance of a forced relationship. Briggs wants money promised him for the journey and Mary Bee wants to accomplish a task. When Mary Bee at one point throws herself at him, Briggs’s response is a callous, “You asked me. I didn’t ask you.”

Jones directs the film as a refutation of the classic western. The landscapes are not Remington vistas but broken, cold, and empty expanses. When Briggs comes upon a hotel stuck in the midst of an arid panorama, it looks surrealistic. The journey itself is not in the traditional western trajectory of east to west but its reverse, an escape from an unforgiving land and a rejection of the pioneer spirit, a retreat back to civilization. Jones’s template is less Ford and Hawks and more in the druggy spirit of the late sixities/early seventies revisionist westerns – The Wild Bunch, Zachariah, Little Big Man. But those films had an energy and joy in their questioning of conventions. The Homesman however is reflected in Jones’s weary and insouciant expression. The Homesman  is worn out and helpless. It’s True Grit without the laughs.

The Homesman unravels in a stoned grandeur. It’s a howl of violent rage against the treatment of women in our western past, a past that has been cauterized into a harsh scab. 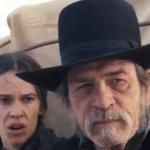 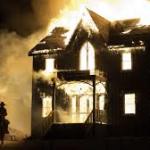 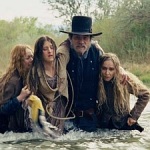