Shotgun!
Buy It From Amazon
Buy It On DVD
Buy It On Blu-Ray

Home is a perfectly serviceable, often quite likeable family film. It’s not Pixar, and frankly, it doesn’t pretend to be. Instead, it falls somewhere in between the pop culture quip-a-minute mindlessness of other Dreamworks efforts (Madagascar, Shrek) and the studio’s far more engaging output (Kung Fu Panda, How to Train Your Dragon). Within its multicultural take on a “pleasant” alien invasion are lessons about understanding, selfishness, sacrifice, and family — but don’t worry, they’ve left in enough soon-to-be-dated jokey references and literal toilet humor to keep the post-modern pre-adolescent happy.

The Boov (sounds like “groove”) are a stumpy extraterrestrial species who specialize in cowardice and running away. They are being chased across the cosmos by an intergalactic enemy with a vendetta. When the Boov’s leader, Captain Smek (Steve Martin) picks Earth as their next hiding place, the planet is invaded with the indigenous population rounded up and sent to relocation communities in Australia. The pudgy little creatures take over, turning the world into their own upside down version of Boov reality.

For one specific being named Oh (voiced by Jim Parsons), Earth is a second chance. Constantly making mistakes, he hopes a “Warming House” party will bring him closer to his compatriots. Sadly, he screws that up, potentially alerting their enemy of their location. In the meantime, Gratuity “Tip” Tucci (Rihanna) has avoided capture and is desperate to find her mother (Jennifer Lopez). Oh is also eager to right his wrong and save the day. Together, they head to Paris to confront Captain Smek and see if they can’t stop the inevitable confrontation with the baddies.

A good way to judge Home is by the man behind the lens (computer) — director Tim Johnson. Among his many credits are Antz (meh), Sinbad: Legend of the Seven Seas (double meh), and Over the Hedge (ouch!), so one shouldn’t go into this film anticipating greatness. Or even goodness. Acceptability, on the other hand, is often the response to what Home has to offer, and as long as you keep your expectations low, they’ll be rewarded with a genial, genuinely good time. Parsons is perfect, Rihanna handles her voice-over skills with charm and flare, and the rest of the cast and character design create a multicultural sense of diversity that is sorely lacking in most kid vids.

But in 2015 we’ve come to expect more from our animated features. They have to have big ideas, big themes, or just big visuals. Eye candy can save even the most superficial effort, but Home isn’t necessarily interested in inventive optical wonder. Instead, it plays on the obvious (the aliens think inedible things are food), retreats to the repetitive, and acts as a nice 80-minute infomercial for Rihanna’s next LP (the soundtrack for the film). Because it hits all the familiar beats, because it doesn’t try to reinvent the whole stranger in a strange land trope, we get sucked into the sentiment. It’s not earned emotion, but it’s nice that it’s there.

Sure, Steve Martin’s character is a total waste of time (he’s a leader because… he has a rock on the end of a stick that he hits his fellow Boov with?) and we really don’t see the threat from the enemy until far too late, but that still doesn’t deny the viewer Home‘s easy, simplistic pleasures. We get the necessary narrative arc to intrigue us, the non-stop jokes to humor us, the goal-oriented plot points to keep things moving along, and of course, the mandatory hero moment where true mettle is tested and the powerful are placated (or put in their place). If you demand more from your electronic babysitter, maybe another Home will be more to your liking — home video. 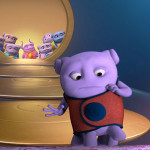 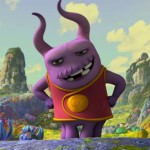 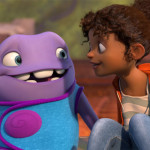