"First you and then the director."
Buy It From Amazon
Buy It On DVD
Buy It On Blu-Ray

When Knocked Up was released in 2007, it was clear that one cast member would skyrocket to fame with Knocked Up as a springboard to superstardom. But with much blood under the bridge since that time, who would have ever imagined the cast members that actually made the leap — that Jonah Hill would have two Academy Award nominations and Seth Rogen would not only become a writer-director-producer-star but that he would even be the cause of an international incident. Back in 2007, the Knocked Up star with the movie star aura around her was Katherine Heigl. She was made for greater things. But, except for her follow up film, 27 Dresses, Heigl’s career has flatlined. A 1980s connection could be made with Kathleen Turner, who hit the heights with Body Heat and 14 years later became camp with Serial Mom. Heigl has gotten to Serial Mom in half that time with her new black comedy thriller Home Sweet Hell, a very sad affair. Heigl’s only hope is that from Home Sweet Hell all she can go is up. Either that or take the Turner route of putting on a few pounds and doing Tennessee Williams and Edward Albee revivals on Broadway.

In Home Sweet Hell, Heigl is the perfect, upwardly mobile suburban wife, Mona Champagne, of the local discount furniture store magnate, Don Champagne (Patrick Wilson, in full dithery neurotic Eddie Bracken mode), who delivers sincerely insincere television commercials (“I’m Don Champagne, taste master. The pleasure is all mine.”). Mona is a cool, psychotic OCD personality, smiling and scrubbing her kitchen sink, obsessing over her goal book, scheduling sex with her husband weeks in advance (“We will have sex on the 9th as scheduled – until then you can take care of yourself”), controlling her weak husband (“I am the strong one – I have to accept that”), and dominating the family like a suburban Hitler (“We are going to achieve our goals because we have standards and strategy and focus”). Unfortunately, Don ends up having an affair with a sexy new hire in the store, Dusty (Jordana Brewster), who then claims she is pregnant and blackmails Don. Don tells Mona and before long Mona is pulling out the chain saw to dismember a body, stocking a severed head in a freezer, and impaling a naked women on a samurai sword. She also freezes dogs.

Director Anthony Burns and writers Carlo Allen, Ted Elrick, and Tom Lavagnino set up a cartoonish world of suburbia satirizing… what? Who knows? Burns and company just lash out at everything in sight with no basis in any kind of reality. They seek the lowest common denominator in blood, gore and crassness. The point of Home Sweet Hell is no point at all. And Burns’ characters are not send-ups or comic types. They are wisps of ideas. Home Sweet Hell is a contemptuous mess passing itself off as a hip black comedy. But no matter how heinous the subject of a black comedy, the satire always has innocence to it (Dr. Strangelove deals with nuclear annihilation and a character can state, “Gentlemen! You can’t fight in here. This is the War Room!”). Home Sweet Hell however comes with the curdled innocence of the wised up.

After Mona carves up a body and disrobes into her bright white bra and panties, red blood on her white albino face, she tells Don, “We’re going to need to pick up more trash bags from Costco tomorrow.” With any luck there will be a bag left over for this film. 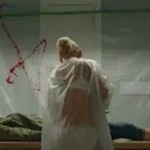 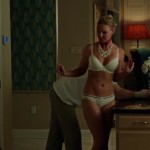 One thought on “Home Sweet Hell”