Did I Get Any on My Face?
Buy It From Amazon
Buy It On DVD
Buy It On Blu-Ray

The opening scene of High-Rise reveals that the discord between social classes in the titular housing development turns chaotic, to put it mildly. It’s getting back to that intriguing flash-forward of bloody disorder that proves a chore for director Ben Wheatley and screenwriter Amy Jump in adapting J.G. Ballard’s 1975 novel.

The setup is a straightforward one that recalls several other status satires – inhabitants of a high-rise on the outskirts of London are separated by class, with the wealthiest on top and the poorest on the bottom. Tensions rise (don’t they always?) and are released in carefully directed routines, but the actual conflicts dive no deeper than the surface allegory.

Doctor Robert Laing (Tom Hiddleston) moves into the building on the 25th floor (out of 40), entrenching himself in the upper middle class. His fellow inhabitants are painted in broad strokes, including boozy single mother Charlotte (Sienna Miller) one floor above him and married couple Helen (Elisabeth Moss) and Wilder (Luke Evans) several floors below. Surely strategically, the rich are given more attention, with the likes of anchorman Cosgrove (Peter Ferdinando) and aristocratic Pangbourne (James Purefoy), among other blue-bloods, always slinking around.

Because we know where this living experiment is headed it’s just a matter of discovering what leads to the decay. The answer? Not much beyond the poor being angry and forlorn over their second class citizenry, the debauched rich wary of those beneath them, and Laing the credulous guy (class) in the middle. There’s not even plot to be found with Royal (Jeremy Irons), the always-dressed-in-white architect of the building who lives in the lavish penthouse. He’s just another cipher left to deal with the building’s failures, both physical and metaphorical. He throws out a line of dialogue that begins with “Et tu” at some point, so there’s that.

The high-rise itself is obvious in design, with the balconies of the upper floors jutting out further and further, giving the top of the structure a curved, talon-like shape. The claw is most dangerous at the tip, I suppose. Inside, however, it’s just a bunch of concrete walls and hallways with the occasional punch of color that give a sterile, Kubrickian feel. It’s occasionally striking, though how many times do we need to see a grocery store as endless aisles of plain, nondescript labels representing bland consumerism? And perhaps the idea of a self-contained living environment complete with a grocery store, its own parking structure, pool, restaurant, etc., was once novel, but it’s a common urban lifestyle today. Now, we don’t even need a fancy residential building to retreat into and make us stir crazy; we’ve got smartphones for that. Wheatley rides the concept, leaving the look firmly in the ‘70s and treating this environment as something totally foreign that needs to be wallowed in. 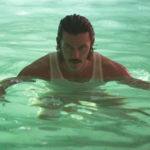 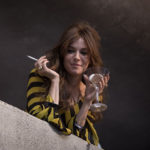