Heaven is for Real
By: Bill Gibron

Santa, however...
Buy It From Amazon
Buy It On DVD
Buy It On Blu-Ray
Buy The Book

In order for you to buy the premise of Heaven is for Real, you have to take the title 100 percent seriously. You should be Born Again, washed in the blood of the Savior, and satisfied that all earthly dominion pales in comparison to what it waiting for us in the Biblically promised afterlife. Of course, if you have questions, if the rational mind imagines that the impressionable child of a struggling country minister might have somehow soaked up a bit of his pappy’s old time religion while hallucinating during a medical procedure, then you probably shouldn’t settle in at your local Cineplex. This film will find your lack of faith disturbing.

Heaven is for Real is a movie that preaches to the converted because… well, because, they’re the only ones who’ll accept this narrative without questioning the content. As with almost all belief-based entertainments, this simple story of one boy’s version of life after death lacks an inclusiveness or community that allows the doubtful to enjoy the proceedings as well. For example, Noah may contain nonsense that even the most devoted member of the congregation might find objectionable, but at least Darren Aronofsky delivered a more mainstream moviegoing experience.

For Heaven is for Real director Randall Wallace (We Were Soldiers, Secretariat), his underserved demo only wants devotion, even if it comes via a rainbow horse-riding Jesus and CG angels singing “We Will Rock You.” Why God’s agents would allow a song by a known homosexual (Queen’s Freddie Mercury) to be sung remains unanswered. But anyway, in the film, little Colton Burpo (played with novice child actor discomfort by Connor Corum) requires an emergency appendectomy, and while under, experiences the aforementioned glories before returning to earth to explain it all to his parents. At first, his preacher father (Greg Kinnear) has doubts. But as with any story told by a preschooler, everyone starts to unequivocally believe him. This raises issues with a couple of parishioners (Thomas Haden Church and Margo Martindale) as well as drawing the attention of the modern Satan: the media. Soon, the Burpos’ earnest existence is in chaos.

As a manipulative melodrama full of hope and pretty post-production images of paradise, Heaven is for Real is actually a quite dodgy film. It allows believers to bask in the truth while telling outsiders to get right with God or miss out on his majesty. All doubt is quelled, all questions answered by the cherubic face of our highly questionable narrator. Common sense argues for a child with a vivid imagination. Cinematic sense determines that Master Burpo’s story is legit and then Heaven is for Real spends the rest of the running time trying to convince you of same, which raises an interesting point. Since the film is geared specifically toward those who whole-heartedly believe, why do we need such a hard sell? Wouldn’t it be better to make the debate the real story, leaving the conclusion up to the audience?

Apparently not. Heaven is for Real is not out to appease the agnostic. In fact, it’s really not out to do much except tell Colton’s story (which has since become a cottage industry that includes a New York Times bestseller, a national speaking tour, and other faith-based tie-ins) and confirm it as fact. Of course, the only support it can muster seems either circumstantial or coincidental. Granted, there are some emotional epiphanies to be had, but they also feel cheap and unearned. Their unexpected effectiveness can be chalked up to the cast, including Kinnear, who suffers for his onscreen son like a trooper.

Still, none of this makes Heaven is for Real a good film. It’s just a sermon. Some will get it, and for those who don’t it doesn’t matter. 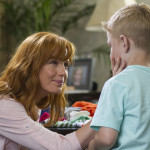 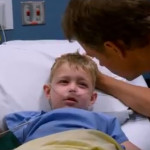 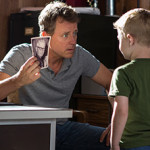 3 thoughts on “Heaven is for Real”