Hands of Stone
By: Blake Crane

Why are these gloves so heavy?
Buy It From Amazon
Buy It On DVD
Buy It On Blu-Ray

Hands of Stone follows all commandments etched on the ancient tablets that guide biopic and boxing movie convention. The humble beginnings, the rise to prominence, the fall from grace, and redemption are all here out of mere obligation. Roberto Durán is one of the greatest boxers of all time and his relentless brawling style and background are ripe for dramatic exploration, but writer/director Jonathan Jakubowicz attacks the story with the bluntness of a straight punch. That plowing-ahead approach is thrilling in the ring, not on the screen.

Did you know that Durán grew up poor in Panama? That he wooed and eventually married a woman from a higher social class? That he was guided to world championships by a legendary trainer? That he had an intense rivalry with Sugar Ray Leonard? Well, Hands of Stone depicts all of this and more with all the enthusiasm and emotional resonance of a Wikipedia page.

The term paper style writing attempts to parallel the rise of Durán (Edgar Ramirez) with the professional rebirth of his trainer Ray Arcel (Robert De Niro). At a Madison Square Garden bout in the early ‘70s Arcel immediately identifies Durán as a special talent and agrees to take him on as a pupil, but the quarrelsome Panamanian wants nothing to do with the old white guy. There’s some anti-American bias due to being abandoned by an American father, along with contentious politics surrounding the Panama Canal.

In the world of Hands of Stone, all Americans in Panama in the mid-20th century were flag-ripping, machine-gun pointing, cartoonish bigots. The whole of Panama, outside of the mansions of the successful boxer and his wealthy manager (Rubén Blades), is a slummy, depressing place that forged the young Roberto’s rugged disposition.

Arcel was a successful trainer forced out of the sport by New York “wiseguys,” embodied here by smooth-talking caricature John Turturro. Avoiding the mob’s ire by training the rising star pro bono, the legend is able to get back in the game.

Just getting the duo together proves too much for Hands of Stone to handle structurally. Soon after Durán initially rebuffs Arcel, he’s shown jogging in Panama as Arcel barks out sage advice. No explanation is given as to how or why a partnership was brokered, the film content to let us accept it as an inevitability. We’re also left to fill in the blanks of the personal relationship between the two, as Ramirez and De Niro have little interaction beyond bromides and question/answer exposition.

That detached storytelling extends to the ‘personal life’ and ‘professional career’ sections of the bio. The brash fighter creepily pursues a schoolgirl (Ana De Armas, her second thankless love interest role in as many weeks on the heels of War Dogs). She, of course, is immediately charmed and eventually becomes his wife. On Arcel’s side of the ledger is an abandoned adoptive daughter who returns to be a discussion point with his current wife (Ellen Barkin) and is then forgotten, this time by the movie.

The apex of Durán’s in-ring exploits were fights against Sugar Ray Leonard (Usher Raymond, a serviceable likeness), and the film uses them to pad runtime instead of mining them for significance in defining its central character. Jakubowicz spares us training montages and the typical fight build-up rigmarole, but the matches are shot and choreographed in an uninspired way. Also uninteresting are the shady contract negotiations for the rematch, which feature Don King’s hair (attached to actor Reg E Cathey). Even the famed “no mas” moment in the second fight is treated as a box to tick and isn’t properly contextualized. The third, and much later, fight isn’t mentioned at all, probably because you don’t want to end on another downer.

Ramirez creates a bit of a personality out of the simplistic profile, making the disagreeable fighter somewhat likeable as he stalks a woman or is inappropriate in front of his kids. There’s no saving the insults of Sugar Ray’s wife, though. Despite Ramirez’s efforts, there’s nothing of substance to take away about the man he’s portraying. You can learn way more about Durán’s rough nature by watching YouTube clips of his fights than by watching Hands of Stone. 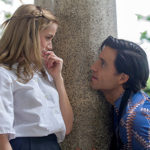 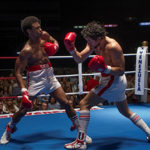 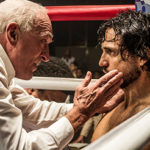 One thought on “Hands of Stone”