Who wants hot dogs?
Buy It From Amazon
Buy It On DVD
Buy It On Blu-Ray

At this point in his career, Adam Sandler should feel damn lucky. While other equally famous funnymen have come and gone (Jim Carrey, for example), he’s managed to maintain a certain midrange commerciality that results in hits, not mega-blockbusters. As long as he keeps his costs down and his casts grateful (got that, Rob Schneider?), he can churn out as much middling dreck as possible and still see a profit. It’s foolproof. It doesn’t rely on Hollywood’s new business model of seeking solid greenback pastures overseas. Instead, the same people who lined up to experience such witless wonders as Billy Madison and Happy Gilmore keep coming back, year after year, to see his patented sophomoric shtick.

And now he’s roping the family film audience into the mix with his brainless Grown Ups films. While the original movie felt like a paid vacation for Sandler and his cronies (Chris Rock, Kevin James, David Spade), this effort wants to set up a series where our former Hollywood hot shot returns to his home town, hangs out with his buddies, and deals with the dilemmas of being a dad. Indeed, former big deal talent agent Lenny Feder (Sandler) has moved his fashion designer bride (Salma Hayek) and kids to his former childhood stomping grounds and they are dealing with the culture shock quite well. In the meantime, buddy Kurt McKenzie (Rock) has got a job with the cable company and must help his wife (Maya Rudolph) cope with their terrorizing toddler.

Eric Lamonsoff (James) and his spouse (Maria Bello) can’t quite figure out why there son is such an idiot (the kid thinks three plus five is thirty five) while laidback horndog “Higgy” Higgins (Spade) has just discovered he is the father to a troubled teenage boy (Alexander Ludwig) he never knew he had. As they wander around this small town interacting with locals such as a drugged-out bus driver (Nick Swardson), a couple of crazy cops (Shaquille O’Neal, Peter Dante) and their old rivals Wiley (Steve Buscemi), Malcolm (Tim Meadows), and Dickie (Colin Quinn), they have a run in with some local frat boys. While the dudes threaten revenge, our oldsters have to deal with numerous issues involving their kids.

Starting out in the crudest way possible (an extended sequence with a rogue deer urinating on Sandler and his sons) before settling for a schizophrenic approach to its laughs, Grown Ups 2 can’t quite figure out where its occasional strengths lie. When Sandler and crew play papa, dealing with the contemporary kid via their old school snark, we find ourselves laughing along. After all, the main premise of this burgeoning series is a bunch of old comics, complemented by an equally odd series of cameos and supporting characters, dealing with the issues that come with age. There’s a knowing wit to Rock’s pop culture riffs, a sense of established slack in Spade’s obsession with a bulky female bodybuilder. But then the movie maneuvers over into unnecessary scatology, be it a stream of animal pee or James’ patented (and horribly overdone) “burp-sneeze-fart” gag.

Like the first film, Grown Ups 2 is nothing more than a studio sponsored sabbatical, a quasi-bankable star giving his buddies a (sometimes, much-needed) paycheck and a bit of high profile career placement. The lessons it teaches — bullies are bad, everyone has a hidden talent, tolerance is cool — are generic and obvious, while the contrivances within each interpersonal relationship are nothing more than setups to punchlines that frequently miss, when they arrive at all. This is sloppy, subpar pandering, a film made by someone who realizes his time is almost up and he needs to grab all the gusto, and studio money, that he can.

One day, Adam Sandler might return to his goofball glory days. Until then, he’ll keep making movies like Grown Ups 2, and it’s his audience that will support him, and suffer, in the process. 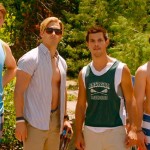 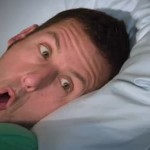 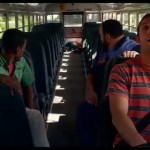 One thought on “Grown Ups 2”