You’ve never seen anything like Gravity before. Nothing can prepare you for the unbridled brilliance of what director Alfonso Cuaron accomplishes with some specialized set rigging, two terrific actors, and a collection of F/X so special they should create an Oscar category for them exclusively. As a thriller, it scores. As an exploration of man’s place in the universe, it’s insightful. As a character study, it’s complete, and as a way of looking at human endurance and potential in the face of unbelievable odds, it’s amazing. While it may not have the overall emotional resonance it so desperately wants, this is still a masterwork of form and artistic creativity.

It all starts off routine enough: Astronauts Matt Kowalski (George Clooney) and Dr. Ryan Stone (Sandra Bullock) are upgrading the Hubble Telescope as part of a planned spacewalk. He’s a seasoned veteran. She’s a newcomer brought on as the inventor of the new technology being employed. While marveling at the magnificence that is space, a Russian missile destroys a spy satellite, sending an ever-growing debris pile in the direction of our heroes. Before long, their shuttle is destroyed, and Kowalski and Stone are adrift. Hoping to make their way to the nearby International Space Station, he has to give her a reason to live. Once there, the tables are turned and Stone must overcome her own psychological scarring to find a way out of the predicament. Another orbiting facility may hold the key to her salvation.

As jaw droppers go, Gravity leaves one’s mandible right on the floor. From the opening shot of our beautiful big blue marble to the opening action sequence involving a weightless clash with errant space junk, Cuaron captures our imagination and captivates us. As he proved with Children of Men, he understands the needs of a genre effort and makes sure that everything he does is in service of the story’s speculative nature. It is particularly easy for him to do this here since he co-wrote the script with his son, Jonas, and the story has all the necessary beats — the perfect storm setup, a Herculean task to be completed by mere mortals, the personal problems that plague their possible achievement, and the last-minute resolve that revitalizes our spirit and hope. There are also moments of great sadness, though Cuaron is not as successful with these as he is with the movie’s more whiz-bang bravado.

Had there been a true sense of emotional investment here, something we can settle in with and use to rally around our own feelings, Gravity would be a full-on classic. It would be right up there with 2001: A Space Odyssey and Solaris. Instead, what he have is a marvelously-acted entertainment that showcases how absurd Hollywood is. Cuaron had to fight to get this movie made and thanks to Ms. Bullock and Mr. Clooney, he finally got the studio on his side. Luckily for him that both are terrific, engaging, and vulnerable while making the initial science stuff easy to comprehend. Once all hell breaks loose in the airless void of space, both actors accelerate their game, becoming part of our conscious concern over the consequences.

Indeed, as this nail-biting journey above the Earth turns into a true life or death struggle, Gravity succeeds in becoming a real edge-of-your-seat thrill. The otherwise gimmicky 3D technology is used here to great effect, adding to the experience and making the distant planet below seem both inviting and foreboding. Toward the end, we pray our heroes can find a way back home. Once we understand the various ways that could happen, our hope turns to horror. Gravity is that kind of film. One moment it’s majestic. The next, it’s pure movie menace… and magic. 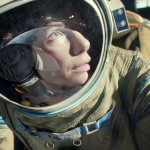 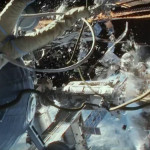 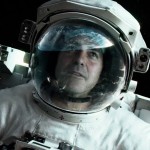