Goon: Last of the Enforcers
By: Blake Crane

Chicks Dig Scars.
Buy It From Amazon
Buy It On DVD
Buy It On Blu-Ray

While hockey comedy Goon, released in 2011, didn’t completely transcend sports movie standards, it was a fresh mix of vulgarity and brutality with genuine wit and heart. Sean William Scott was great as the tough on-ice enforcer and loveable halfwit, finding a purity in the thuggery that extended far beyond the rink.

Goon: Last of the Enforcers occasionally taps into the life lessons and observational humor by way of brutality formula that worked in the original, but this time trivialities mainly involve hitting tropes of a cluttered, common story instead of reveling in the silliness. Though there are laughs within the various micro-narratives, this six-years-later sequel feels a little clunky and superfluous. We’re not enjoying the ride with a wacky bunch of minor league hockey players, we’re picking out beats and recognizing that Last of the Enforcers is a lot like Rocky III (with parts of II peppered in) … on ice! And not nearly as inspiring or well-paced.

Now out of the game, Doug is forced to take a boring office job while prepping for the arrival of a child with wife Eva (Alison Pill). As the Highlanders struggle without their emotional leader, Doug feels the pull of the action, going so far as to join a fighting league comprised of fellow former goons, including old rival Ross Rhea (Liev Schreiber). Will Doug be able to lace up the skates once again to save the Highlanders while also adjusting to family life? (Probably, yeah).

First-time feature director Jay Baruchel, who also co-wrote the original as well as the sequel, powers through the journey episodically. Doing so wastes the charms of Scott, who’s comedic chops go well beyond American Pie’s Stifler, and reduce him to part cheap joke machine and part pawn of the plot. As Doug deals with a weird new boss and comes to grips with leading a more domestic life, the parallel story of the Highlanders feels incongruent and inconsequential, made all the more mediocre by interjections from a wacky, inappropriate sportscaster. Were those really T.J. Miller’s best improvised zingers?

Returning supporting players – Pill, Schreiber, Kim Coates, Marc-André Grondin, and Baruchel, among others, are given little to do beyond functional duties. Any intrigue is added by Russell as Cain. He relishes the villain role and adds layers to the brute’s madness, mostly caused by his father/Highlanders owner (Callum Keith Rennie, also very good). Cain’s arc is also awkward, however, spaced out randomly within Doug’s undertakings and failing to generate hatred or empathy. The build to an inevitable climax is meandering and, disappointingly, the sequel’s “big game” scenario succumbs to cliché whereas the original didn’t bother.

Goon was riotous and viciously poked the eye of time-honored sports movie banality; Last of the Enforcers is an innocuous follow-up that has its moments but fails to string them together effectively. The folly doesn’t have near the eloquence or intensity. 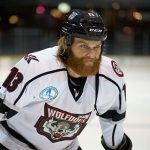 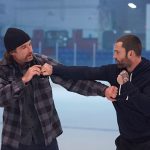 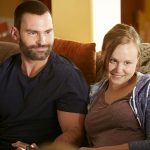