Just like the plot...full of holes
Buy It From Amazon
Buy It On DVD
Buy It On Blu-Ray

Apparently, our current crop of wannabe action directors need lessons in legitimate stunt sequence staging… and filming… and approach… and editing… and non-CG logistics. Since the rise of lighter and lighter cameras, the computer’s ability to mimic anything, and a generational decline into short attention span brainlessness, car chases are no longer nail-biting, edge-of-your-seat experiences. Instead, they are a surreal combination of inferred immersion topped with steel-on-steel sleight of hand that only a motherboard, a programmer, and some guy with scissors can comprehend. Gone are the days of John Landis piling up hundreds of Chicago cop cars for the sake of his Blue Brothers muse. Today, everything is fast, furious, and filmed that way.

This might explain the god-awful Getaway. Needing a paycheck to pay off a bookie could also be a viable excuse for this shameful B-movie mess. Ethan Hawke, who was having a boffo year until this travesty showed up, plays a former race car driver whose wife has been kidnapped by Jon Voight (who knows, maybe the Missus looks like Angelina Jolie). On instruction, our hero gets behind the wheel of a stolen Shelby Mustang Super Snake and goes all Grand Theft Auto on the streets of Sofia, Bulgaria. Along the way, he picks up Selena Gomez, whose character has so much dimension she is given an appropriately reflective name — “The Kid” — who turns out to be a hacker and the owner of Hawke’s sweet, sweet ride. Together, they become the pawns in Voight’s game of mayhem and mindless destruction.

Somewhere in the great recesses of a Russian crypt, Sergei Eisenstein is seeing the results of his experiments in editing in The Battleship Potemkin applied to Getaway, and he is figuring out a way to rotate instead of rest in peace. Director Courtney Solomon, of Dungeons and Dragons and An American Haunting fame, reportedly shot almost all the car sequences practically, using anywhere from 20 to 40 plus cameras to capture the chaos. He then put all these available angles into what appears to be a faulty version of Final Cut and eviscerated any sense of space, timing, setup, or payoff. It’s as if Solomon believed that holding any shot for longer than five seconds was somehow a crime against cinema. If you think the shaky, hand-held approach to action is nauseating and antithetical to the genre’s key concept, then what we have here is an absolute travesty.

It’s not just the filmmaking that’s at fault. The screenplay from first timers Sean M. Finnegan and Gregg Maxwell Parker is so bereft of logic, so limited in its potential, that we need something stylized and over-the-top to really sell it. Shoot ‘Em Up managed to accomplish this goal with the gun battle and added in some intriguing character beats as well. Here, we get shorthand sketches of personality that barely add up to a single solid human being assayed by actors both adequate (Hawke) and way out of their league (Gomez). Indeed, if it wasn’t for all the crude language and inappropriate gestures, the former High School Musical queen would be just another hoodie-wearing brat trying to act tough without a shred of inherent chutzpah. To call her vacant and uninvolved would be like calling water wet. It’s obvious. So are Voight’s various villainous personae. He doesn’t come up with an original baddie. He just borrows from others and then heads down to the local S&L to deposit his pay.

Getaway should have been sleek and inspired, and there is a moment toward the end where Solomon allows us to see things from the car’s point of view (in an extended, nearly two-minute, uncut take) where we finally understand what the film was trying for. As it stands, it’s the only valid element of a movie jam-packed with post-post-modern misfires. 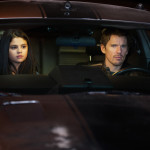 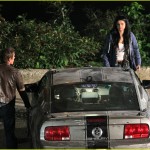 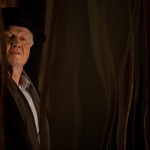