And the Oscar for best costume design goes to...
Buy It From Amazon
Buy It On Blu-Ray

Let’s face it. Ever since Irwin Allen passed from this mortal coil and took his terrifically tacky disaster films with him (The Poseidon Adventure, The Towering Inferno), the only person capable of capturing his campy kitsch craziness in the wake of an Armageddon is Roland Emmerich.

From Independence Day and the brilliant 2012, no one understands the buoyant bombast of blowing up entire cities and sweeping away the aftermath via tidal waves and earthquakes better than this diabolical director. Not even Allen found a way to work the loss of the entire West Coast of the US and potty training into a single sensational slice of cinematic cheese.

Now his former partner Dean Devlin wants to try his hand at world-ending histrionics, and with a premise as preposterous as Geostorm, he’s found his vehicle, if not Emmerich’s equal. Wallowing in the contemporary qualms about global warming/climate change and plagued by a plethora of attention deficit designed special effects, this is filmmaking as farce, a spectacle so loud and lumbering that all the fun has been leached out of it. At least Emmerich knows when to add the necessary cheese factor. Devlin just dives right in and pulls out cliche after cliche.

Why? Who cares? Geostorm is so lost in its CGI chaos that we never understand the reasoning behind the desire to destroy the planet. It has something to do with the White House, Butler’s brother (played by Jim Sturgess) and a cast of actors who really should have known better, from Ed Harris to Andy Garcia. There’s a conspiracy, a desire for payback, a Presidential adviser who wants to “make America great again,” and a lot of other nonsense you won’t care about.

If all you want out of a disaster film is plenty of catastrophic eye candy, Geostorm is not the first place tor turn. There are some interesting moments of mayhem, as when a tsunami hits the ultramodern cityscape of Dubai, but for the most part, Geostorm is “been there, done that.” The fact that this was a troubled production, delayed in order to address focus group concerns and replace key behind the scenes staff, is apparent in every frame. In fact, it’s hard to believe the mandatory reshoots did any good whatsoever.

The film feels like full blown fan service, avoiding anything complicated or realistic to, instead, emphasize the over the top and the eye popping. Devlin is desperate to capture the manic magic Emmerich seems to create every time he puts the world in peril, but instead of delivering the goods, he grates on the nerves. Throw in the government conspiracy which acts like a distraction, not a defining element, and you have a total waste of time. Geostorm is the very definition of wasted potential. Not even the massive mega-storms can convince you that there’s something to see here.

As mindless entertainment backed by a total waste of talent go, Geostorm is your joyless junk food. While it offers the kind of up to date technological bedlam we want from an end of world saga, it presents it in such a manner that even a sloppy SyFy channel made for TV mockbuster would feel superior. Dean Devlin is no Roland Emmerich, and as such, Geostorm is no 2012. Take that for what it’s worth. 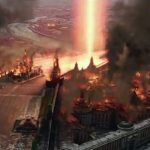 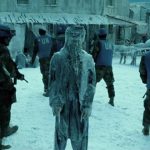 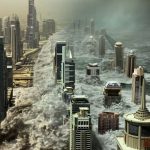