I never learned how to fold 'em.
Buy It From Amazon
Buy It On DVD
Buy It On Blu-Ray

You can tell by the look on his face, this isn’t going to end well. A dour and disheveled man, his suit ill-fitting and his mouth configured into a disgruntled grimace, walks into a shady situation with a chip on his shoulder and a briefcase full of cash. With one spray of the cards, he’s down $10,000. After discussing his situation with the men in charge of this illegal gaming establishment, he owes more than $250,000. Of course, he can’t help it. Indeed, college professor Jim Bennett (Mark Wahlberg) is The Gambler, an angry addict who can’t control himself where wagering is involved.

He’s also the protagonist for Rupert Wyatt’s (Rise of the Planet of the Apes) remake of James Toback’s 1974 film starring James Caan. As scripted by Oscar winner William Monahan (The Departed), we get a similar slice of seedy social underbelly with the kind of snappy dialogue that makes the otherwise predictable plot zip right along. With a collection of excellent supporting performances and solid work from Wahlberg at the core, what’s basically a “been there, done that” idea gets a new lease on cinematic life.

We soon learn that Bennett is a good professor, a no-nonsense kind of guy who won’t give in to newfangled teaching ideas. He comes from a wealthy family, though his late grandfather (George Kennedy) and his rich witch mother (Jessica Lange) refuse to lend him the money to help get him out of trouble. While there are hints that he used to date his students and indulge in other vices, he actually refuses the advances of a talented writer (Brie Larson) who wants to know more about him.

That’s because Bennett has a bigger problem now. He owes a quarter of a million dollars to an Asian crime boss (Alvin Ing) and has borrowed even more from a notorious gangster (Michael Kenneth Williams) to no avail. Both are promising violence if he doesn’t pay off his debts. He’s decides to approach a dangerous loan shark (John Goodman) hoping to make one final score and set everything right. Of course, considering his luck and the life he’s led so far, it doesn’t look like Bennett will come close to succeeding.

With Wyatt’s unflinching desire to see his characters hit the very bottom of their own individual downward spirals and the words Monahan puts in their mouths while doing so, The Gambler frequently feels kinetic and alive. It zings and zaps through the various pitfalls in Bennett’s life without turning things into an exercise in sadism. Every move our characters make seems to have some personal resonance, even if we don’t recognize it at first. When Lange’s wretched matron heads to the bank to bail her son out (reluctantly), the attitude she presents is masked by her fury at the teller giving her grief. When she gets outside and finally talks to her son, we get the real reaction to his choices — and it’s heartbreaking.

Goodman also has moments like this, times when we know he wants Bennett to fall in with his high interest rate routine and yet, almost like a father, he warns his “son” of the consequences. There is a subplot involving a future NBA prospect and points shaving, but it almost feels out of place, as if Monahan, having taken massive liberties with James Toback’s original narrative to begin with, needed a way to link this remake back to the source. The performance by newcomer Anthony Kelly is excellent, but the motives seem mired in a desire to reference the past.

Luckily, Wahlberg’s work is the glue that holds this all together. He’s cocky and convincing, barely allowing his ever-present fear to show through. By the end, when we wonder if he’ll ever work his way out of this mess, we can see the panic in Bennett’s eyes. It’s all Wahlberg, and it’s great. Too bad the main storyline of The Gambler is so obvious. With a little more finesse we’d have a great film instead of a very good one. 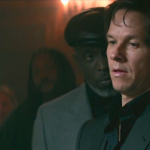 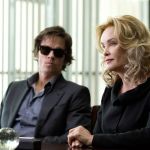 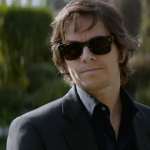