Brad angry!!!
Buy It From Amazon
Buy It On DVD
Buy It On Blu-Ray

World War II is about to end, at least in Europe. The Nazis know it. The Allies sense it. As the Americans move into Germany, retaking the territory from the Third Reich, city by scarred city, they meet with the kind of ridiculous resistance which sees the brutal SS recruit women and children as both shields and soldiers. The carnage, and chaos, is unimaginable. Into this melee comes designated desk jockey Norman Ellison (Logan Lerman), suddenly reassigned thanks to massive losses among the Army’s Armored Tank division.

The moment Staff Sergeant Don “Wardaddy” Collier (Brad Pitt) lays eyes on him, he sees another unnecessary casualty. Still, just as he promised the rest of his crew — mechanic Grady “Coon-Ass” Travis (Jon Bernthal), gunner Boyd “Bible” Swan (Shia La Beouf), and driver Trini “Gordo” Garcia (Michael Pena) — he will do everything he can to keep them all alive. As their campaign pushes deeper and deeper into enemy territory, and the Germans grow more and more desperate, Collier senses he will have a very hard time living up to his pledge.

With its intricate attention to detail, feeling of authenticity, and old school battle sequences (if there is CG here, it’s seamless) Fury is a fine companion piece to Steven Spielberg’s groundbreaking epic Saving Private Ryan. It offers a similar level of brutality, reducing the jingoism typically associated with this kind of story to simple sentiments and absolute truths. During the quieter moments when Collier is trying to console his dirty and drained companions, he offers up undeniable truisms that skirt cliche and click with the attentive viewer.

This is war as several circles of hell, where man’s inhumanity towards their fellow man mutates into a kind of workaday given which sees heads blown off, eyes shot out, and torsos torn open by mortars. Gore is given its due here, but director David Ayer (yes, this is from the same man who wrote Training Day and helmed Street Kings, Sabotage, and End of Watch) treats it like everything else during combat. It’s matter of fact and frequent, made all the more cruel by how lax the experienced soldiers treat it. Collier, on the other hand, sees the shadow of death hanging over his every move. Once in a while, as his men decompress and repair their vehicle — named Fury — he heads off into the distance to derail, internally. Pitt’s performance is pitch perfect in these moments, the tears in his eyes welling and receding as he realizes there’s still a lot more war — and killing — to get on with.

Ayer offers up additional meaningful moments of downtime in between clashes, such as when Collier and Ellison stumble upon a pair of German women who reluctantly allow them to use their apartment. Trying to act like gentlemen, it seems that some manner of understanding can be reached. When the rest of the company come crashing into the scene, their drunken crudeness undermining the attempted civility, Ayer’s motive becomes clear. There is no place for pleasantries in such a situation. No matter the meeting of the minds, war still comes down to one side hating (and hurting) the other. Granted, this is all fictional. There is no true story version of Fury to compare this film to. But what Ayer accomplishes “feels” right. It’s honest, frank, and wholly un-manipulative.

Toward the end, when it looks like all is lost and no one will survive, Fury makes its most daring assertions. It doesn’t sugar coat the problem or reconfigure the fight to save those involved. Instead, we get a legitimate last stand, one man’s torn-open temperament in defiance of a much more powerful opponent. Audiences may not appreciate the realism, but it’s the price of such conflict. Fury is a fine example of an old fashioned concept given a meaningful post-modern polish. It’s terrific, and tragic. 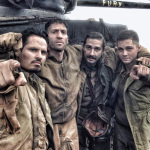 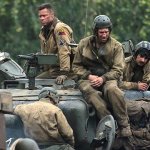 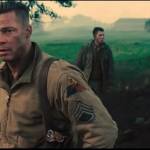