Don't Worry, I'll Save You
Buy It From Amazon
Buy It On DVD
Buy It On Blu-Ray

Imagine the most dull and lifeless history lecture you’ve ever sat through. Now add awards season aspirations, Civil War revisionist ambitions, and a weird desire to counterprogram against the onslaught of Summer movie popcorn entertainment, and you’ve got the beginnings of why Free State of Jones doesn’t work. As a film, it’s a footnote filled textbook. As an example of a forgotten aspect of the War Between The North and The South, it’s intriguing, yet never engaging. And when you consider all the talent both behind and in front of the screen, it’s a misfire of mass proportions, a slog that takes itself way to seriously.

As yet another example of the white “savior” helping the poor, misguided minorities through life, it’s the standard neo-liberal apologizing framed as drama. It wants to inform but it does so in a jagged, broken fashion. Granted, star Matthew McConaughey does his best to keep his character of Confederate deserter turned guerilla warfare leader Newton Knight from becoming a cliche. This is a man who is angry because of the class system in the South. Too poor to own slaves, he wonders why he is fighting for such a cause.

Eventually, he tires of all the death (Knight was a field nurse during the War) and returns home, only to discover that his family and friends have been ravaged by the growing needs of the Confederate military machine. Thus we get the whole “lower class fighting the rich people’s battles” dynamic which drives Knight’s desires. As a deserter, he must seek shelter from the Army, and it is here where he runs into a ragtag team of slaves including his future wife Rachel (Gugu Mbatha-Raw). They lead raids against the Confederates. The War ends. Reconstruction begins, and Knight soon learns that there are other evils that need to be challenged as well.

By this point, we’ve stopped caring. Free State Of Jones has its heart in the right place, but it can’t build up enough internal drama to make us worry about what will happen to the characters. This is a narrative as postscript, not so much unfolding in front of us as being spoon fed, slowly, from a dry and droning volume. Gary Ross, who’s earned a few Oscar nominations for his work (though he’s probably best known for guiding Jennifer Lawrence’s Katniss Everdeen through her initial Hunger Games paces) can’t escape the nobility of his intentions. It is clear he wants to show that not all Southerners were slave-loving villains. His staid approach here, however, minimizes any gravitas he could gain from his equally overwrought narrative.

As for the acting, McConaughey is good, if simply delivering what we’ve come to expect. He’s got the grizzled drawl down, but we really don’t learn more about Knight except for his racial tolerance and steadfast desire to hold his ground. As Rachel, the slave he will eventually marry, Mbatha-Raw is also decent but distance. We don’t get the raw truth behind her previous life, just the problems and potential dangers that come with being a black woman married to a white man in America circa the late 1800s. You can tell that Ross finds their story intriguing, and tries to buffer it with a 1948 trial involving Knight’s great-grandson and the charge of miscegenation. We see the perspective, but we don’t feel it.

And that’s the biggest problem with Free State of Jones. Unlike other great films such as 12 Years A Slave or even Selma, which casts the treatment of African Americans throughout history as the horror show it was, this tries to counterbalance such sentiments with a “rise up and resist” mentality. It doesn’t work. It just lies there, inert, like the notes you need to study from for a History midterm. 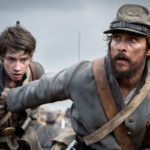 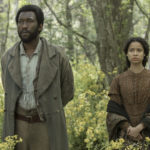 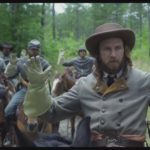