Can you dig this far out heroes walk?
Buy It From Amazon
Buy It On DVD
Buy It On Blu-Ray

Two groups of unscrupulous characters convene in an abandoned factory for an arms deal. What could possibly go wrong? A lot, and in Ben Wheatley’s Free Fire it does. Entertainingly so. The ‘70s styles are broad, the gunfire is loud, and the quips are sharp. The consequences for immoral operations are also gruesomely real, and the subtext underneath the reckless abandon communicates the futility of living by the gun (deal).

The deal hits a snag when the guns aren’t what was ordered. Tensions rise when it’s revealed that members of the supporting muscle on either side – druggie loose cannon Stevo (Sam Riley) and hot-headed Harry (Jack Reynor) – had a violent encounter the previous evening. Cooler heads most definitely do not prevail, words are exchanged, the first shot is fired, and a wild symphony of gunfire commences. It’s a farcical take on the final act of Reservoir Dogs extended to feature length.

Copley is the most blatant comic relief, a gun dealer who’s inept with a gun, and his over-the-top, thickly-accented buffoonery plays well here. The entire lead-throwing ensemble sustains the energy with comedic timing that far outpaces the shooting accuracy of their stereotypical characters. There are several leg and arm wounds.

Allusions to deeper plot developments are smartly left vague by Wheatley and his co-writer (and wife) Amy Jump. There are twists and surprises involved in a “who’s-conning-who” element that, though it’s ultimately revealed, isn’t the thrust of the action. Bits of information regarding the shady dealings of both crews are brought up and then never shared with the other side, serving only to add more color to the flamboyant personalities shooting it out. Also, none of that really matters when the guy across from you is ready to take you out as soon as you show yourself.

In-the-moment concerns are more pressing, like finding the next crumbling cement column to duck behind. Wheatley stages a series of small tasks, like retrieving ammo, procuring the briefcase full of cash, or making it to a ringing factory phone, that help keep things from feeling too repetitive. The ‘70s-era setting immediately fixes the cell phone problem in addition to being an excuse for a lot of killer facial hair. Unfortunately, it also allows for an uninspired, ironic blaring of John Denver from a van’s 8-track player.

Tired tropes are kept to a minimum, and the ones that are there – the click of an empty gun when someone is lined up for a kill shot and a dropped weapon or two, are outshined by the sheer silliness of it all. Combatants are firing out of reflexive obligation because it’s “us” against “them.” And to save their own skin, sure, but there was no legitimate reason for this escalating mayhem in the first place. The motivations are juvenile in a film that’s reveling in the immaturity while also slyly calling it out. Just like mom used to say, “It’s always funny until someone gets shot in the face and set on fire.” 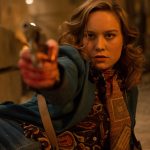 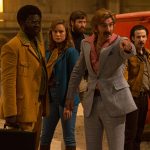 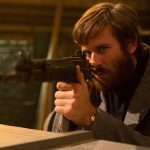