Westerns were once a dime a dozen, but they’ve become less common in recent years. One reason for this is surely the fact that there are only so many ways to combine the genre’s core elements: dusty towns, saloons, shootouts, whores, and so on. Finding a new angle with which to approach these things isn’t easy anymore. Every once in a while, a filmmaker succeeds in doing that, while other times we get something sturdy but overly familiar. Something like Forsaken. If you just want to see a half-decent Western, it fits the bill, but the movie’s Unforgiven-lite story prevents it from being much more than that.

Kiefer Sutherland plays John Henry Clayton, a retired gunslinger who returns to his hometown of Fowler, Wyoming to make amends with his estranged preacher father, Rev. Clayton (Donald Sutherland). Not long after arriving, he reconnects with Mary-Alice Watson (Demi Moore), the now-married love he left behind. He also discovers that ruthless rancher James McCurdy (Brian Cox) and his goons are terrorizing local residents who refuse to sell their land to make way for the forthcoming railroad. McCurdy has even hired a right-hand man, Dave Turner (Michael Wincott), to directly apply pressure to the holdouts. Upon seeing their strong-arm methods — and realizing that both Mary-Alice and his father are potentially coming up on McCurdy’s list — John Henry has to decide whether to abide by his decision to swear off killing or protect the town by fighting back.

What Forsaken has working in its favor is a handful of really good performances. Kiefer and Donald Sutherland are, obviously, very credible as father and son. Both are skilled at suggesting things that run under the surface. Together, they create a fractious relationship between John Henry and Rev. Clayton that is affected not only by family bonds, but also by religious faith. (The reverend has trouble accepting that his son has disobeyed God’s will by killing so many.) Scenes between the two men have an undercurrent of tension that helps convey the tenuous, complicated vibe between them.

As the story’s villain, Brian Cox wisely opts for subtlety rather than outright menace. McCurdy is fearsome because we sense that when he explodes, he explodes big. The best performance, however, comes from Michael Wincott as Dave, a deadly man who nonetheless operates under a certain moral code. He believes in violence only when there’s no other recourse, and has little tolerance for those who use it as a first resort rather than a last one. Wincott gives the character real charisma, showing how he continually sizes up every situation, looking for the most direct (but still fair) option possible. The final scene between Dave and John Henry is deeply satisfying for that reason.

As good as those performances are, Forsaken stumbles significantly in several areas. For starters, the big female role is nowhere near as developed as the male roles. Demi Moore is a welcome presence in the film, but she’s saddled with a stereotypical “love interest” part that’s here mainly to help define John Henry. Mary-Alice is never anything more than a plot device.

More significantly, the story is largely a retread of Clint Eastwood’s Oscar-winning Unforgiven. The similarities are so blatant that it’s impossible not to think of that film when watching this one. There’s a bottom-line interest in seeing John Henry grapple with his violent nature, but Unforgiven explored the theme with far greater nuance and depth. Here, it’s a foregone conclusion what the main character will do, and there’s little exploration of what it means for him afterward, which would have added substantial value to the plot. The movie simply doesn’t make the impact that it could have.

Forsaken is passable Western entertainment, thanks to the actors and some good technical qualities, including production design and cinematography. It doesn’t do anything fresh, but it doesn’t screw anything up too terribly, either. Still, one has to wonder why anybody would want to address the personal implications of a violent gunslinging past when Unforgiven did it so definitively. 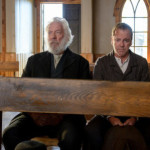 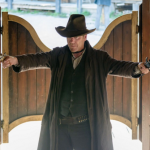 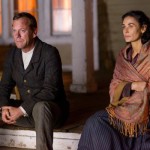