It Follows
By: Bill Gibron

Looks safe enough...
Buy It From Amazon
Buy It On DVD
Buy It On Blu-Ray

At first, it looks like It Follows will uses the familiar horror movie trope about immoral adolescents getting their lethal just desserts. It’s as if John Hughes took The Breakfast Club and turned it into a quasi-slasher “last girl” exercise in extended fear and peer pressure. But dig a bit deeper and you’ll see the S.T.D. subtext right in front of you. Yes, the movie makes a lot out of young ones being reckless with their sex, but then writer/director David Robert Mitchell turns the creepshow cliche on its head, requiring its victims to make even more irrational decisions in order to rid themselves of this carnal “curse.”

Backing up a bit, the story starts with a young woman walking toward a lake. In the morning, she is found dead. Cut to our heroine, Jay (an excellent Maika Monroe) as she spends a lazy fall afternoon in her pool. Surrounded by her sister Kelly (Lili Sepe) and childhood friends Yara (Olivia Luccardi) and Paul (Keir Gilchrist), she’s a typical teen going through the typical adolescent angst. One night, she goes out with a boy named Hugh (Jake Weary), and even though he acts a bit odd, they hit it off. The next date, they have sex, and he responds by drugging Jay and tying her to a wheelchair.

Now, the bad news: Hugh has given his date “something”…something that won’t stop and will continuously follows her until it “takes” her. He warns her that it can form any shape, will never stop, and that she has to make sure to never be alone in any room or stranded anywhere where there is only one exit. Soon, Jay starts seeing things — an old woman walking through the halls of her school, a half-naked girl stalking through her kitchen. She tracks down Hugh and has him explain things. Turns out, if Jay “passes it along” (that is, has sex with someone else), they become the new target.

Thus we begin the baffling, near-brilliant It Follows. It walks so close to the border of being too on point that you worry Mitchell will make a mistake somewhere along the line. Instead, by channeling other genres outside of horror (the coming of age, the school misfits, the adolescent love story), he finds numerous novel ways to keep the “safe sex” message bubbling just beneath the surface. We get the point of the film — be careful who you give yourself to, even in those moments controlled by raging teen hormones — but there’s more to the film than this. Mitchell wants us to understand the long term ramifications, the ones that will, per the title, follow you for the rest of your life.

As with masterworks such as The Exorcist and Hellraiser, the key to a successful scary movie is the appropriation of another concept (the generation gap, adultery) as the means of adding depth to your dread. It also helps to have someone with vision behind the lens, and Mitchell does instill a sense of patience and terror with his slow-burn, extended tracking shot style. Whenever Jay sees “someone” coming for her, her reactions are just as important as the threat, and this director gets it. There are no scream queens on display, just frightened kids who are still coming to grips with the implications of their actions.

You can also see the nods to other films, shout-outs to such fright fan favorites as Halloween and Let the Right One In, among others, while less noticeable lifts from the indie scene fill in the homage gaps. This is a quiet film, the weird Casio keyboard-inspired score reminding us of a bygone era while the complete lack of parental supervision suggests something from the ’70s, or today. As successful as a scare experience as it is a statement, It Follows gets under your skin, and then burrows its way into your subconscious. All ulterior motives aside, it remains a wonderful horror film. 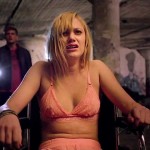 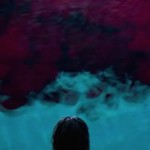 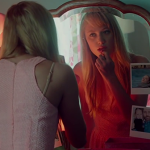 One thought on “It Follows”