Who’s the filthiest of them all?
Buy It From Amazon
Buy It On DVD
Buy It On Blu-Ray
Buy The Book

Filth wallows in itself for its entire runtime and tries to come out clean on the other end. Not that it requests redemption for its despicable wreck of a central character – quite the contrary, actually. It asks us to indulge the self-aware sociopath by bearing witness to every last curl in his downward spiral. The film is purposely – and very proudly – messy, but its attempt to mix degradation with drollness results in a blur of drug-and-despair-fueled psychological hokum that’s more hackneyed than incisive.

A beady-eyed James McAvoy plays against type as Bruce Robertson, an Edinburgh detective who cares way more about getting his next fix than performing his police duties. The plot is loosely built around the investigation of a student’s murder and the battle for a promotion in Robertson’s department, but the thin drama exists in the background as the copper’s collapse grows more rapid and steep. He snorts, chugs, fornicates, and bullies while angling for the job he thinks will heal his relationship with estranged wife Carole (Shauna Macdonald). She appears in softly-lit, ethereal fantasy sequences that suggest an unattainable ideal. A haunting childhood trauma and visions of a mocking psychiatrist (Jim Broadbent) with an exaggerated cranium are tossed in, just in case we need more evidence of Robertson’s fragility.

Whether demanding sexual favors from an underage girl during questioning or plying best mate Bladesey (Eddie Marsan) with ecstasy for no good reason, McAvoy does it all with a purposeful energy. His conviction is admirable, but it can’t disguise the phony material. Adapted from an Irvine Welsh novel, Filth keeps heaping on and heaping on to the point that the excess and general cruelness lose their acerbic bite. Borrowing stylistically from Danny Boyle’s Trainspotting – another Welsh adaptation – writer/director Jon S. Baird gives his film a polish that belies its off-putting subject matter, but Filth lacks the humanity and understanding that marks its spiritual prequel. And, lest we forget, Trainspotting features a fantasy sequence where a junkie dives into a disgusting public toilet.

Efforts to humanize Robertson come off as narrow justifications for his behavior, inserted into the narrative out of obligation. In addition to the familial pains of past and present, underdeveloped subplots half-heartedly attempt to add soul to the proceedings. The bad detective becomes emotionally linked to a caring woman (Joanne Froggatt), who he instinctively helps in a time of desperation. He’s connected to Bladesey’s wife Bunty (Shirley Henderson) in a very different way, placing obscene phone calls to her for self-satisfaction. When tasked with tracking down the perverted prankster, the irony of Robertson literally investigating himself while also becoming metaphysically lost in his psyche is a banal affirmation of the film’s own bluntness.

Baird deserves credit for managing the dreck (a complimentary term in this case), without it turning into an incoherent hodgepodge. Filth almost tries to make too much sense of its antihero, becoming more (and more, and more) of the same and failing to leave any kind of real stain. It never rises above a level of low-grade sleaze and doesn’t delve deep enough to make us care about anything. Marsan is underutilized as a wholesome counter to McAvoy’s brute, as are Jamie Bell and Imogen Poots as Robertson’s put-upon colleagues.

At one point Robertson schemes to bed a co-worker by flaunting an artificially enlarged photocopy of his penis. Filth is a lot like that Xerox – it may be flashy and might look good on the page, but the subject matter is ultimately unsatisfying when put into practice. 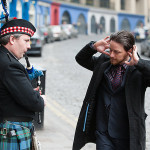 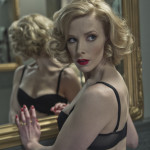 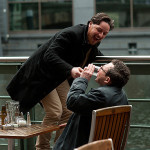