Which way to the china shop?
Buy It From Amazon
Buy It On DVD
Buy It On Blu-Ray

When the story was first tackled way back in 1938, it won an Academy Award. It was two years after the source material was initially published, and helped a fledgling animated filmmaker named Walt Disney cement his legacy as the future of his genre. Fast forward eight decades as we are being treated to the Saturday Night Live, sketch overstaying its welcome version of Ferdinand the Bull. The original book was barely a few pages long, with pictures. We are now being treated to a expanded narrative that adds way too many modern touches, but still manages to capture the heart of the source material’s message.

John Cena, who is clearly following the Dwayne Johnson path out of wrestling and into pop culture, plays the title toro, a macho man-cow that would rather stop and smell the flowers than take on the misguided matadors in the bullfighting ring. When he was young, he escaped the bloody sport and ended up on a farm with a young girl named Nina (Lily Day).

After an incident in the local village, Ferdinand is sent back to the bull pit, where he reconnects with associates from his childhood, Bones (Anthony Anderson), Guapo (Peyton Manning), and Valiente (Bobby Cannavale). He is also helped by a goat “coach” named Lupe (Kate McKinnon). When an egotistical bullfighter named El Primero (Miguel Ángel Silvestre) chooses Ferdinand to be his final challenger before retiring, things seem set. Then our hero learns the truth about what happens to those defeated in the ring, and it’s every steer for themselves.

As family fare, Ferdinand is fine. It’s entertaining, funny, a bit inventive and even a tad insightful. But like a great idea pushed to the limits, this is a small idea stretched to the feature length format, and the transition is not always smooth or endearing. Yes, there is a master class moment in animated slapstick the moment our oversized bovine enters into a china shop (yes, that happens), and it reminds you of how wild and wacky the genre can be. But then there is the overabundance of ancillary characters. Along with our hero, there are four or five other bulls, a few hedgehogs, Nina’s family, and…well, the list goes on.

Ferdinand also suffers a bit from the ADHD ideal that stains other animated fare. Convinced that kids won’t sit still for character development or plot turns, director Carlos Saldanha (Ice Age, Robots, Rio) just piles on the players. Sure, they have their moments, but they often feel like distractions. And then there’s the theme. Apparently, you can’t make a kiddie film without referencing the whole “be true to yourself” cannon. Granted, that was the point of the original story, but ever since animation became a studio ATM, it seems like every narrative focuses on our protagonist being misunderstood and eager to stand up for themselves and be counted.

Still, Ferdinand is a lot of fun. Cena does good work, as does McKinnon. In fact, the latter steals the show more than once as the manic, goofball goat. The visual look is appealing and offers lots of visual gags and kooky character design. The script also has a nice balance between message and the mayhem, even if the lesson occasionally gets lost in all the CG silliness.

Compared to other kid vid not released by Pixar, Ferdinand is a hoot. It proves that even the most muscle bound meathead can break free from his prepackaged persona and find a new niche to explore. John Cena may be billions away from filling The Rock’s international superstardom, but with more movies like this, he will be matching him, receipt for receipt, before too long. 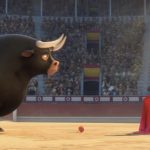 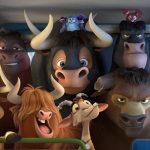 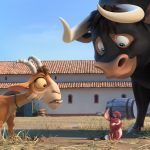