I am woman, hear me...quietly question authority.
Buy It From Amazon
Buy It On DVD
Buy It On Blu-Ray
Buy The Book

A good story needs no embellishment. Great actors don’t need gimmicks to get their point across. A quality director typically makes an equally excellent film and a work of classic literature just needs the right Merchant/Ivory like attention to detail to truly shine. So it’s a bit odd that Thomas Vinterberg’s adaptation of Thomas Hardy’s Far from the Madding Crowd feels so slight. It still works as a story, it has great performances, and a good director (he made the brilliant and controversial The Hunt back in 2013) sitting behind the lens.

But Hardy’s half-feminist, half-romantic fantasy tome lacks a certain bite that will keep contemporary audiences at arm’s length. Even with Carey Mulligan giving her character the right level of nuance and knowing and a cast of co-stars (Matthias Schoenaerts, Michael Sheen, Tom Sturridge) blending beautifully with her, we still don’t feel the allure of the material. Way back in 1874, this all felt so novel, and even a bit naughty. Now, some 141 years later, it plays like a placid, slightly predictable period rom-com.

Still, there’s a lot to like in story of Bathsheba Everdene (Mulligan) and her trio of suitors: sheep farmer Gabriel Oak (Schoenaerts), military man Frank Troy (Sturridge), and standard Victorian bachelor William Boldwood (Sheen). Having inherited her relative’s estate, and with it, a kind of freedom few in her era would ever enjoy, the narrative becomes a basic question of who is right for our heroine — or better yet, who will she think is right for her. Naturally, we believe it to be Gabriel, but both Frank and William offer the promise of something more devilish (the former) and socially acceptable (the latter). For Bathsheba, it all boils down to a question of love vs. lust.

Far from the Madding Crowd, at least in this incarnation, is a pleasant if predictable entertainment. It finds a way around Hardy’s often hackneyed plotting to provide a level of drive and drama that few films based on old books can create. Most of this comes from Mulligan, who gives spunk and pluck a whole new level of pre-post-modern resonance. We sympathize with Bathsheba, cheering her victories and worried over her possible pitfalls (especially with Frank). She’s a great center, and this is a narrative that needs it. With its trio of possible paramours and the various misunderstands and subplots between them, we have to have a familiar and friendly point of reference.

Of course, something this old can also be something really contrived, and while David Nicholls’ script tries to root things in realism, you can’t help but feel the book in the background, like a ghost, haunting this adaptation. We come to Hardy to see Hardy, not a veiled attempt at bringing the author into the modern world. This is especially true of previous adaptations, including John Schlesinger’s take on the material with the incomparable Julie Christie. For his version, Vinterberg wants to intoxicate the viewer, both with lush cinematography (courtesy of Charlotte Bruus Christensen) and equally evocative costuming and production design. He more or less succeeds.

And yet we still feel a slight chill in the air. That’s because Far from the Madding Crowd, for all its positives, is still a work of old fashioned fiction. It’s manipulation masquerading as legitimate human emotions. Toward the end, when Bathsheba’s impulsiveness comes back to burden her and the storyline starts struggling, we immediately understand the limits of film vs. the infiniteness of prose. With writing, the theater of the mind fills in the blanks, creating perfect scene after perfect scene. Once brought to life, cinematically, we are stuck with the sole interpretation of the filmmaker and his or her hired help.

For those looking for an antidote to the next four months of blockbuster ballyhoo, Far from the Madding Crowd is excellent counterprogramming. It can barely stand on its own, but when it does, it’s a delight. 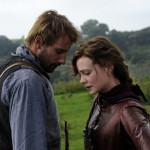 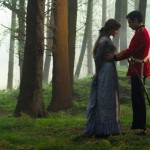 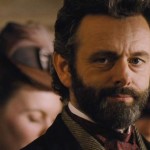