Do I look fat?
Buy It From Amazon
Buy It On DVD
Buy It On Blu-Ray

Ex Machina feels like a Danny Boyle film, and it should. It was written (and now, directed) by the Oscar winner’s longtime collaborator Alex Garland. Responsible for the excellent 28 Days Later and the equally stunning Sunshine, the UK scribe has a knack for taking pulp ideas (a “zombie” outbreak, an interplanetary mission) and investing them with intelligence and invention. The same applies here. Working with that sci-fi warhorse — artificial intelligence — the first time filmmaker crafts an engaging, intriguing thriller which works as both a dissection of the topic and a quality entertainment.

In this speculative slice of the not too distant future, Oscar Isaac plays Nathan, the billionaire creator of a search engine entitled Bluebook. He lives alone in a massive compound, his only human interaction coming from his mute servant Kyoko (Sonoya Mizuno). Nathan is working on a new robotic system and brings company underling Caleb (Domhnall Gleeson) to take part in what’s known as a Turing Test. It will examine his creation, Ava (Alicia Vikander), and the machine’s ability to think like, or unlike, a human being. At first, everything seems fine. But as man and automaton start to turn on each other, the fine line between both is blurred, creating chaos in its wake.

If the last part of that plot description seems overly vague, it’s because one of the best things about Garland’s genuinely great film is discovering what the story (and the various conversations that make up the majority of the plot) have to say about the subjects featured therein. Ex Machina is not only one of the best films about A.I. ever made (and that includes Steven Spielberg’s masterful take on Stanley Kubrick), but it approaches the concept from unique and unusual angles. Ava, as a robotic female with synthetic skin hands, a wire frame body, and a gorgeous face, is clearly a machine. Yet she has at her disposal a stack of womanly wiles which argues that there is more to being “human” than simplistic emotions.

Indeed, that’s the core subtext here. Feelings are the catalyst to actions for both man and his creation. Nathan appears to be looking for verification that he can spend the rest of his life with a robotic plaything without finding the “relationship” odd. Caleb falls under Ava’s obvious spell, initially intrigued by “her” reality, but slowing falling for her manipulative, mechanical come-hither. Kyoko provides a reminder that, as people, we can be flawed and distant. Ava might be the answer to every man’s secret prayers — subservient and capable of “reprogramming,” if necessary — and yet Garland argues that technology trumps pure submissiveness. Instead, once an object starts thinking for itself…

Again, no room for spoilers here. Thanks to its slick art direction and production design, Ex Machina resembles a multimillion dollar blockbuster. But instead of the standard robot rebellion, Garland’s script plays out like a classy kitchen sink melodrama, a group of “people” hanging out in the countryside, their wants and desires determined over the course of their time together. Ava is particularly intriguing, since her entire journey (much like the one explored in the Spike Jonze Oscar-winner Her) is founded on the simple question: What is real? If she is thinking and interacting with others, isn’t that enough? Or is “real” something less tangible and more ephemeral? Getting to that conclusion is what makes this movie so good.

There are other elements at play here as well. Nathan, as Caleb’s boss and chief rival, is also testing his underling. He wants to see how the young man interacts with this compelling machine before taking the next step in this relationship’s evolution. It turns a standard story into something quite special. In an era where so-called fans mistake dogfights in space for serious science fiction, Ex Machina reminds us how effective and exciting mere ideas can be. It is one of 2015’s best. 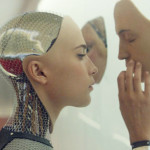 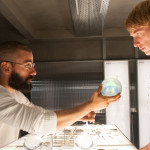 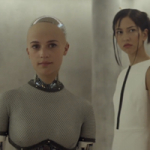