Are We There Yet?
Buy It From Amazon
Buy It On DVD
Buy It On Blu-Ray

In the context of a science-fiction setup, when the chief of a mission into deep space to explore the possibility of life says that “finding nothing would be an effective discovery,” we know that outcome isn’t likely. There most certainly will be something, but thankfully Europa Report is more than just a generic exercise in building to a big reveal or a loose framework to support disaster-in-space action. Director Sebastián Cordero and writer Philip Gelatt are more interested in the journey – conquering the challenge of deep space travel and what a discovery of this magnitude, even if only a touch of algae, would mean for our place in the universe. Even when the film drifts decisively into established thriller tropes in the final act, the underlying sense of exploration remains.

Perpetuating the film’s authentic approach are motivations derived from the real 2011 revelation that vast subterranean lakes may exist under the icy surface of Europa, one of the many moons of Jupiter. In the movie universe of Europa Report this scientific discovery has led to coordination of the deepest manned flight into space, because where there’s water, there’s potential for life. Capturing every moment of the mission to the distant moon are cameras mounted in and on the spacecraft Europa 1. Transmissions to and from Earth are cut for months as the travelers soldier on, suffering setbacks and tragedies that cast doubt on the importance of their task. Now, footage of the mission has been received and declassified, revealing all secrets.

The found footage format has inherent issues (who is editing it, etc.), but at least every scrap of material contained within Europa Report has a plausible reason for being recorded and there aren’t any seams with the integration of computer effects or enhancements. It feels as real as can be expected. There is, however, a forced news report that introduces the crew in checklist format: chief William Xu (Daniel Wu), scientists Daniel Luxembourg (Christian Camargo) and Katya Petrovna (Karolina Wydra), pilot Rosa Dasque (Anamaria Marinca), and engineers Andrei Blok (Michael Nyqvist) and James Corrigan (Sharlto Copley).

Intercut with footage from the mission to Europa are excited pre-launch press conferences and documentary-style talking head interviews with mission director Samantha Unger (Embeth Davidtz) and scientist Dr. Sokolov (Dan Fogler). They fill in plot gaps in an understandable way that isn’t too convenient or compulsory.

With the ominous bass of the subtle score emphasizing the lurches of Europa 1 and the psyche of its inhabitants, the film relies heavily on mood to wring drama. Measured and mindful of the scientific building blocks of science fiction, Europa Report presents obstacles for the team to overcome and illustrates the consequences of how they decide to act. I’ve never been so engrossed in frank conversations involving landing zones, ice drilling, or hydrazine. The scripting is technical yet understandable and the cast is uniformly solid at delivering the data while sounding both conversational and knowledgeable.

Valid exchanges continue into a climax reminiscent of any number of films, adding genuineness to the tense moments of oxygen running low, frantic repairs to the ship, and a mysterious glow that appears under Europa’s ice mass. Whatever the fate of the various crewmembers, and whatever they do or don’t discover, conclusions are reached through a fervent dedication to duty. Keeping that in mind the crew, and Europa Report, successfully completes the mission.

The Blu-ray includes two making of featurettes – one focusing on the visual effects the other on the score, a theatrical trailer and a photo gallery. 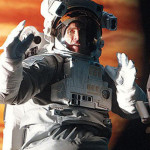 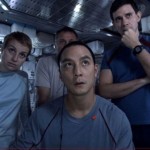 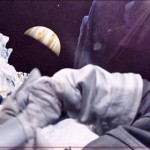