Wait, Aren't We Too Old for This Sh...
Buy It From Amazon
Buy It On DVD
Buy It On Blu-Ray

There was a time, say a quarter century or so ago, when an announced pairing of Arnold Schwarzenegger and Sylvester Stallone would have caused widespread action-film geek panic. Constantly seen as competitors in the mid ’80s, this dynamic duo delivered the goods time and time again, from The Terminator to Rocky, Rambo to any number of thick-accented and/or mumble-mouthed heroes. Sure, we’ve already seen them together in the commercial retro revisionism known as The Expendables, but this is the first time the guys have truly co-starred together. Unfortunately, instead of making a spry prison break thriller, the team has delivered a dull, dispirited slog.

There are pacing problems o’plenty here and it’s all director Mikael Håfström’s fault. With such titles as 1408 and Derailed under his belt, you’d expect better from the Swedish filmmaker. Instead, he lumbers along, amplifying every piece of plot minutia by screenwriters Miles Chapman (Road House 2: Last Call) and Jason Keller (Mirror Mirror). At 114 minutes, this movie is a good half hour too long — and it’s no wonder. We first have to be introduced to incarceration expert Ray Breslin (Stallone) as he stakes out and eventually escapes from yet another Maximum Security Federal Prison. It’s his job to set up a cover story, head inside the concrete walls of your average penitentiary, and unearth its flaws.

With the help of his team, including ex-con tech savant Hush (Curtis “50 Cent” Jackson), handler Abigail Ross (Amy Ryan), and business partner Lester Clark (Vincent D’Onofrio), he has become quite comfortable, though he has spent nearly eight years straight in various jails around the country. When the CIA comes calling, Breslin finds himself in a secret location known as “The Tomb.” Run by a dictatorial warden named Hobbs (Jim Caviezel) and his brutal right hand man/guard Drake (Vinnie Jones), it’s a virtually inescapable series of walls and vertical shafts. After meeting up with fellow inmate Emil Rottmayer (Schwarzenegger), Breslin decides it’s time to escape. Little does he know he’s being set up, destined to spend the rest of his life in this dark, dour hellhole.

With a premise like this, especially with The Italian Stallion and Mr. Olympia in tow, you’d expect Escape Plan to be a rock ’em, sock ’em fireworks-laced lark, a chance to see two superstar stalwarts trade barbs and punches for a fanbase eager to experience both. Instead, everyone takes this material way too seriously, trying to pass it off as something other than a basic B-movie. There’s no spark, no liveliness to what transpires, just Stallone attempting to emote and Schwarzenegger saving the day with his patented one liners. Yes, Caviezel is a decent villain, especially when he’s using severe tactics to get a prisoner to talk, but there’s no emotional investment in the story here. We don’t care that Breslin is being framed or who or what Rottmayer is. We don’t care that the team back home can’t locate their boss or that someone behind the scenes may not be who they claim.

Indeed, Escape Plan is a movie made up of pre-planned (and well-telegraphed) plot twists, high tech hokum, and more shots of scowling faces than a Danny Trejo marathon. We get angry Aryans, angry Muslims, and angry audience members. We want some pop and pizzazz, not lengthy conversations about guard habits and building layouts. When you place Sylvester Stallone and Arnold Schwarzenegger in a movie together, you expect electricity. All that results from Escape Plan is entertainment ennui. 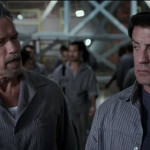 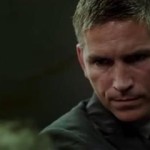 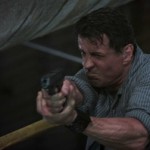