Number 1, or number 2?
Buy It From Amazon
Buy It On DVD
Buy It On Blu-Ray

Gregg Turkington’s alter ego, Neil Hamburger – “America’s funnyman” – is a seedy, scowling phantom, sporting a cheap suit and a greasy comb-over, grasping multiple glasses of booze and coughing up phlegm over punch lines to jokes like “Why did God create Domino’s Pizza? To punish humanity for their complacency in letting the Holocaust happen,” and “Why do rapists eat at TGI Fridays? Because it’s hard to rape if you have a stomach ache.” Neil Hamburger’s subversive meta-comedian schtick of old Las Vegas and Catskills lounge acts has been a L.A.-New York hipster staple attraction for several decades, filling the void left by the disappearance to the ethereal plane of Tony Clifton.

With nowhere to go for Hamburger but down or sideways, enter filmmaker Rick Alverson (The Comedy) whose bleak, David Lynch-lite takes on estranged and lonely outsiders would appear to be a perfect extrapolation of Hamburger’s closing line — “But that’s my life!”

And according to Entertainment, Hamburger’s off-stage life is dire and miserable, like an indie film version of Limelight without Keaton or the ballerina. Relegated to the hinterlands, Hamburger finds himself banished from the club circuits of L.A., New York, and Houston, driving around the grey, barren expanses of the Southwest (the dusty desert wasteland is a perfectly captured purgatory on earth by cinematographer Lorenzo Hagerman that makes Zabriskie Point look like Funny Face). Hamburger definitely needs a new agent. Haunting and taunting belligerent audiences in prisons, dive bars and juke joints and preceded by an offensive clown (Tye Sheridan) opening act, it is a miracle Hamburger makes it out alive. In his off hours, Hamburger kills time by touring airplane graveyards, sand-rusted oil pumps, abandoned mines, rifle ranges, and empty bowling alleys. In a never-ending array of bland and seedy hotel rooms, he is awakened by the sound of a vacuum cleaner in the corridor and leaves phone messages for a daughter we never see or hear (“Hello sweetheart…”). Amidst all this boredom and ennui he encounters a succession of character actor characters — his garrulous and stupid rich cousin (John C. Reilly) who laughs at his jokes while not getting them and then asking “Where’s the growth potential?”; a disturbed male hustler (Michael Cera) in a men’s room; and a coked up woman in a bar who attacks him in a parking lot because Hamburger humiliates her during his performance. But for Hamburger it is all part of being a professional comedian – “Just doing my job. Just trying to make a nice night for people.”

Alverson drags Hamburger by his stringy hair through this world of despair and hopelessness like a maimed bug through an ant farm. Much in the same way that Hamburger’s act sucks laughter out of a room, so Alverson sucks life and emotion from Hamburger’s journey. Entertainment is stultifying and suicidal.

Perhaps the key scene of the film is when Hamburger denounces an audience heckler during his act, deadpanning, “You little whore. You little whore. You garbage woman.” Here is the artist getting his own back at the morons who dare to question his artistic genius. Who needs audience recognition? A performer does what he has to do and is doesn’t matter if he performs at The Comedy Store or Riker’s Island. Audience doesn’t matter. A true performing artist is so hip and high on himself that the only true artistic response is masturbation. In the end it is all self-service. Entertainment is its true embodiment.

For me, the highlight of the film is when Hamburger comes out of a cake as the entertainment at a Hollywood party. Glaring around at the babes in the swimming pool in front of him, he collapses to his knees in noisy primal anguish. Amongst the crowd in chairs who look over at Hamburger, is good old Dean Stockwell — unbilled, just part of the crowd. Please Alverson, couldn’t you have zoomed in and given him a speech. Get some humanity into all this wretchedness. 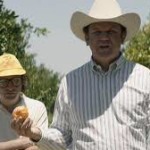 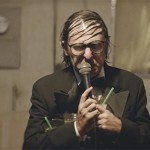 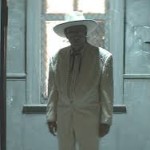