Eddie the Eagle
By: Blake Crane

I hear Red Bull gives you wings.
Buy It From Amazon
Buy It On DVD
Buy It On Blu-Ray

The makers of Eddie the Eagle stick firmly to the blueprints of a sports underdog story, building a satisfactory yet unremarkable take on unlikely British ski jumper Eddie Edwards. The major thrust of the film is celebrating the man’s competitive spirit, driving a desire to compete in the Olympics despite not having any real chance of winning medals. Eddie the Eagle has similar ambitions, made for the sole purpose of manufacturing feel-good responses from audiences and not digging any deeper than surface-level compassion.

For reasons left unexplained, Eddie Edwards has always wanted to be an Olympian, going so far as walking to a bus stop as a child to head off to the Summer Games. By his mid-20s, Edwards (Taron Egerton) has changed focus to the Winter Olympiad, becoming a fairly good downhill skier. His dreams of skiing in the 1988 Calgary games are dashed, however, when British officials deem he’s not “Olympic material,” apparently due to his Coke-bottle glasses and general clumsiness. Undeterred and spurred by a loophole in the qualification process, which requires he only land one jump in sanctioned competition, Eddie switches to ski jumping and heads to Germany to train. There he meets former talented jumper turned PG-13 alcoholic and snowplow driver Bronson Peary (Hugh Jackman), who eventually warms to the weirdo and agrees to coach him.

That Eddie will eventually realize his goal of making it to Calgary is a given, though the movie insists on establishing flimsy obstacles to overcome. The support of mum (Jo Hartley) is unconditional, while dad (Keith Allen) pushes him toward construction work. The team of Scandinavian jumpers in Germany is unfriendly. The qualifying run comes down to One. Last. Chance. The British Olympic Committee throws up more roadblocks. But, of course, it’s all nothing unwavering spirit, and a training montage set to a Hall & Oates song, can’t overcome.

Eddie’s courage isn’t in question, but the best representation of his tenacity comes in the movie’s opening montage, which shows the tween aspiring athlete cycling through various sporting events, his failures measured by broken pairs of eyeglasses being tossed into a biscuit tin. If we know our sports movie symmetry, we suspect that tin may reappear later. It does.

It’s unfortunate, then, that the ski jumping sequences are handled mostly matter-of-factly. The potential outcomes of not sticking a landing are terrifying, and while the movie tells us this over and over, it has difficulty showing us. Director Dexter Fletcher uses low angles from the ground to marvel at the height of the big jumps, but there’s never any queasiness when we’re shown the view from the top or as competitors hurtle towards the ledge. It also doesn’t help that the wipeouts are patched together with some spotty CGI. The danger is never palpable. The real Eddie reported his thick glasses would fog up during his jumping runs, which could’ve been something to draw from and up the sense of risk.

The least convincing jump comes from the legendary talent played by Jackman, whose character is also the biggest problem with the film. Peary is a creation of the filmmakers – Eddie actually trained in America with another coach – and it’s a shame he’s turned into a walking collection of clichés, from the alcoholism to the promising talent squandered. His emotional connection to Eddie is also superficial. Just as Eddie can earn the support of his father and Olympic fandom at large, Peary has a shot to earn the respect of the former coach (Christopher Walken, in a brief, nearly comatose appearance) he disappointed all those years ago.

Jackman and Egerton are both likable and work well together, but it’s hard to believe their characters have any profound effect on each other. The writing of Peary is ultra-vanilla, while Egerton can’t ever escape the look of a handsome actor with prop glasses stuck to his face while contorting his mouth into a crooked smile.

Giving Eddie a single dimension comprised of Olympic resolve works to establish his cockeyed determination, it just falls short of providing context for his quest. Just as the pregnant pause made by Jim Broadbent’s Olympic play-by-play commentator before coining the “eagle” nickname, everything about the journey feels like banal hero-building, overly designed to elicit a reaction. With that construction so apparent, the emotional response is minimal and fleeting. 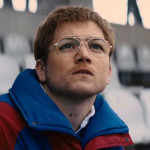 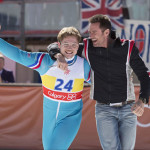 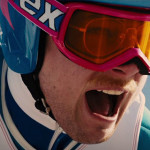 One thought on “Eddie the Eagle”