Earth to Echo
By: Bill Gibron

Clash of the Titans? Never heard of it.
Buy It From Amazon
Buy It On DVD
Buy It On Blu-Ray

Let’s say you’re ten years old. You were born in 2004 and have no frame of reference to the following movies: E.T., The Goonies, Joe Dante’s Explorers, Close Encounters of the Third Kind, Chronicle, or even J.J. Abrams’ Spielberg homage Super 8. For you, those films are just names, their plots and iconography as unknown to you as complexities of politics or the realities of reaching puberty.

If you are part of the particular demographic, Earth to Echo will become your new obsession. It will spark your youthful imagination while offering up a novel artistic approach (the found footage film) that you’ve yet to grow sick of. Within moments of leaving the theater, you’ll be asking Mom and Dad for the title character’s action figure. Your parents, on the other hand, will probably find it all just a slightly tolerable Mac and Me mash-up.

Three best friends — Alex (Teo Helm), Tuck (Brian “Astro” Bradley), and Munch (Reese C. Harwig) — are trying to face the reality that their bond is being broken by a local construction company. Their Arizona subdivision is being demolished for a new highway and the boys’ families are moving to various parts of the country. On the night before this cataclysmic childhood event, one of them gets a weird signal on his cellphone.

Following up on the strange design, they discover it’s a map, so they plot a pretend sleepover and decide to find out where the drawing leads to. The guys discover a little alien robot which they name “Echo,” and soon the tiny being is asking them to help rebuild his spaceship. Along the way, a female classmate named Emma (Ella Wahlestedt) joins the mission, as does an evil adult (Jason Gray-Stanford) who appears to want the tiny creature to stay right here on Earth.

The good thing about Earth to Echo is its desire to break away from its many recognizable movie references and create its own unique if still familiar film universe. It populates its playfulness with child actors who aren’t smarmy or smug, allowing them to be dopey and goofy without taking away from the overall adventure. Pre-teens will eat this up, seeing themselves in the cutesy/clumsy quasi-outcasts and marveling at a movie which speaks their particular language. Older viewers may grow a bit antsy, especially when the last act requires these obvious unlicensed individuals to participate in a car chase, but the truth is that Earth to Echo is a fun experience…

… except for the artistic approach used for the storytelling. By this point in the “found footage” gimmick’s onscreen lifespan, we’ve seen it all. Earth to Echo may indeed be the first family-oriented film to used the cinematic style, but it brings nothing new to the table. Director Dave Green and his jitter-handed cinematographer Maxime Alexandre simply shake the camera ad naseum, creating a similarly spelled feeling in the viewer. Also, because of its low budget, Earth to Echo requires significant creative bait and switch. Whenever an F/X heavy sequence starts to unfold, the visuals become blurred, the better to hide your lack of high tech wizardry.

Luckily, the heart of the movie (and the CG used to create Echo itself) wins us over. Even as we are ticking off the various references, we still find the story exciting, and the youth-oriented message about friendship uplifting. Unlike your typical pre-adolescent offering which offends with its emphasis on marketing and potential product tie-ins, this is a genuine attempt — albeit one undermined by the silly cinematic stunt employed — to bring fun and wonder back to the kid flick. Sure, it borrows from its betters, but at least Earth to Echo is respectful in its redundancy. 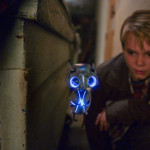 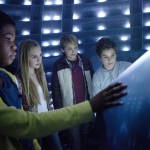 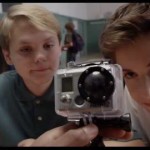