Late wildebeest.
Buy It From Amazon
Buy It On DVD
Buy It On Blu-Ray

The Stone Age punts up against the Bronze Age in Early Man, an animated adventure that’s more predictable and less zany than other Aardman Animation projects.

Even so, this stop-motion feature from the team behind Shaun the Sheep, Chicken Run, and the world of Wallace and Gromit has enough sight gags and amiable silliness to entertain young viewers (and parents who don’t mind a little potty humor).

The film starts with the cutest cockroach this side of WALL-E donning sunglasses to view a mushroom cloud from an asteroid striking the Earth. The crater leaves behind molten rock shaped like a soccer ball (er, football, for viewers in England, where Aardman is based). As the cavemen play hot potato, a craze is born.

Generations later, villagers with the conveniences and technology of the Bronze Age happen upon an idyllic green valley and a Stone Age tribe that time forgot. The scrappy Dug (Eddie Redmayne of Fantastic Beasts and Where to Find Them) wonders why his tribe hunts rabbits when mammoths promise more meat. His chief (Timothy Spall, another alum of the Harry Potter universe) advises that’s the way they’ve always done it, setting up the plot’s familiar shots.

The Bronze Age folks want to boot the Stone Agers to the wasteland, but once Dug notices their fervor for the sport from his tribe’s cave paintings, he suggests settling this on the playing field. He gets help from Goona (Maisie Williams of Game of Thrones), a Bronze Age gal who has her own net dreams and naturally runs circles around the guys. (For all its advancements, her time period doesn’t believe in female athletes.)

Tom Hiddleston (Marvel Studios’s villain Loki) voices the bronze-crazy leader Lord Nooth, a sort of Prince John with a French accent, but the sparkle belongs to the voiceless animals, particularly Hognob, Dug’s pet boar. Hognob is as expressive and as brilliant as Gromit, the wise and faithful dog of wacky inventor Wallace. The boar steals more scenes with a furrowed brow, fidgety hooves, and wobbly knees than some of the punchlines. (The rabbit is a wily silent comedian, too, making me wish the mammoths had more to do. Perhaps some pre-Cretaceous Creature Comforts?)

Those who don’t follow the World Cup or have a familiarity with American soccer might sense some jokes sailing over their heads. But Aardman fans will appreciate the silly wit (Jurassic pork, anyone?), its evergreen message about teamwork, and the animators’ action skills. Even if the story doesn’t soar to the studio’s other heights, Early Man still has its kicks. 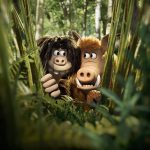 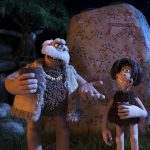 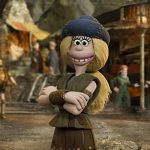