Does this hat make my head look big?
Buy It From Amazon
Buy It On Blu-Ray

There is no doubt about Christopher Nolan’s current status as an auteur. He created the modern superhero film with his operatic take on Batman, and with other efforts like Interstellar, Inception, The Prestige, and Memento, he’s become a name that the fanboys either love or loathe. He has a sure eye for detail, either artistic or technical and he brings a kind of disaffected passion to every project. The same can be said for Dunkirk, his first film based on actual events. By focusing on the attempt to rescue 400,000 British soldiers stranded on the shores of France, and doing so from three different perspectives (land, sea, and air), he makes a case for her abilities as a storyteller, a director, and a recorder of history.

We see soldiers on the beach, including Tommy (Fionn Whitehead), Alex (Harry Styles), and Gibson (Aneurin Barnard), defeated and surrounded by German forces. They are desperate to escape. We follow the attempt by citizens, including Mr. Dawson (Mark Rylance), his son Peter (Tom Glynn-Carney), and teenage deckhand George (Barry Keoghan), whose boats have been commandeered by British authorities, to travel across the English Channel to rescue the men. They eventually rescue a shell-shocked soldier (Cillian Murphy) from a sinking ship. We then spend an hour in the air as a fighter pilot (Thomas Hardy), providing support for the evacuation, takes on a German contingent.

These stories are told in a non-linear fashion and inter-cut with each other to accent the fear and the suspense of what it was like, waiting on those battle-torn beaches, for some hope of rescue. Nolan doesn’t really care if we get to know the character or can follow the various intertwined narratives. What he wants to create is chaos, to give the audience the experience of what it was like for the soldiers at Dunkirk, and to stress the very real dynamic that anyone could die at any moment – and usually did. It’s both terrifying and intriguing, a mind-game made of death and destruction that turns this triptych into a near-masterpiece.

If most war movies are about heroism in the face of certain death, of defying the odds and reaching the limits of human endurance, then Dunkirk doesn’t follow the pattern. Instead, by mixing its varying storylines, by dropping us into the action in a very immersive and cinematic approach (it should really be seen in Nolan’s intended 70mm perspective), we become part of the throng, hoping that the filmmaker will save us, and feeling all the emotions of a soldier when Nolan doesn’t. Instead, we are continuously tossed from one hopeless scenario to another, experiencing the film as much as watching it from afar.

The performances are all perfect, as they serve Dunkirk’s purpose. We don’t get the standard types — the hero, the coward, the turncoat, the know-it-all. Instead, Nolan presents a group of age appropriate everyday soldiers who are too young, too scared, and too duty bound to be anything more. This is the reality of war, not the kind of manipulative melodramatics that a movie like Saving Private Ryan (another amazing accomplishment, don’t misunderstand) resorts to as tear-inducing bookends. Dunkirk is the kind of movie that future generations will stare it, gobsmacked at how brutal and horrifying it all is.

As a director, Christopher Nolan still manages to divide critics. Some find him dull. Others believe he is dynamite. Dunkirk argues for one of the most accomplished filmmakers working today. It’s a big story told small, a significant artistic achievement built out of the blood, sweat, and tears of thousands of WWII vets. It rivals its creator’s best whole while promising a whole new cinematic world to come. With Nolan, every release is an event. Dunkirk deserves such a label, and more so. 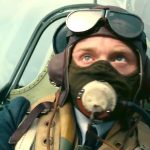 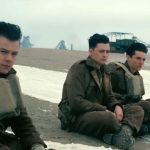 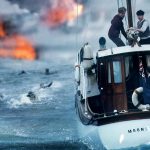