Dumb and Dumber To
By: Bill Gibron

They're willing to pay us HOW MUCH???
Buy It From Amazon
Buy It On DVD
Buy It On Blu-Ray

Twenty years is a long time. Put another way, if you graduated high school at 18, the addition of two decades could result in your own child walking across the ceremonial stage to pick up his or her diploma. It’s the difference between being in your 50s and wandering through your 70s, middle age to retirement. So returning to material that seemed edgy and innovative back in the ’90s runs the risk of feeling dated come the new millennium. In the case of the long-anticipated sequel to Dumb and Dumber, stars Jim Carrey and Jeff Daniels appear more than game. In fact, they are the very best thing about this otherwise ordinary attempt at comedic catch-up.

The problem is this: What was outrageous and outlandish back in 1994 has long been usurped by Judd Apatow and his hard “R” dick joke mantras. In the original film, Daniels has a now classic moment where a laxative causes a major bathroom emergency. In 2014, we’d see not only the setup, but the feces-filled payoff, too. Dumb and Dumber To is too protective of the “PG” part of its “PG-13” rating to revel in such disgust. Oh sure, we get an extended sequence with a catheter, a cat on crystal meth, old lady sex, and several references to the characters’ rectums, but the end result seems sluggish and stupid, almost like a second-tier spoof of the original D&D.

Here’s the story. After discovering that pal Lloyd Christmas (Jim Carrey, back in fun form) has spent the last 20 years faking insanity in a local asylum, Harry Dunne (Jeff Daniels, stealing every scene he is in) reunites with his old buddy to deal with a major medical issue. Seems the latter needs a new kidney, and must track down a daughter (Rachel Melvin) he never knew he had. After locating the mother, the notorious Fraida Felcher (Kathleen Turner), they discover that Harry’s kid was adopted by a famous scientist (Steve Tom). Complicating matters, his gold-digging wife (Laurie Holden) is trying to murder him for his money, and soon our brain-damaged duo are back on the road and knee deep in the plot. Everyone ends up in El Paso at a tech conference, with a Black Ops agent (Rob Riggle) out to kill them.

You can see the potential in Dumb and Dumber To. You can see how eagerly (and easily) Jim Carrey and Jeff Daniels want to reprise their roles. Compared to the actors who played them in the ill-advised prequel, this is real deal. But the Farrelly brothers — Bobby and Peter — no longer have the same spark. Frankly, they haven’t made a decent movie in over a decade (2001’s Shallow Hal) and their last few efforts (Hall Pass, The Three Stooges) are the entertainment equivalent of the Emperor’s New Clothes. The scatology that served them back when Clinton was president has long passed them by and their normal lack of cinematic skill is, once again, painfully obvious. There are times when you can tell Dumb and Dumber To is edited together, piecemeal, from various improvised takes.

Considering that most of the story doesn’t work (the whole rich hubby murder plot was actually done better in the Farrellys’ flawed attempt at reviving the Stooges) and the ancillary characters are mere sketches, one is left to contemplate why it took six screenwriters — six — to concoct this mess. Granted, most of the script seems tossed aside for Carrey’s patented flailing about, but you still have to wonder if this is the best they could do. After all, they had 20 years to think about it. While the main motivation (a quick payday) is never truly visible onscreen, the negligent nature of Dumb and Dumber To is inferred in every frame.

If you have fond memories of this franchise (and have long since forgotten the 1995 animated series and the 2003 prequel), you’ll probably enjoy this motion picture piffle. Unlike fine wine or cheese, however, the Dumb and Dumber concept has not aged well. 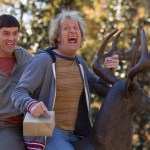 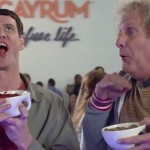 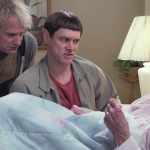 One thought on “Dumb and Dumber To”