The DUFF
By: Blake Crane

Don't you dare (forget about me).
Buy It From Amazon
Buy It On DVD
Buy It On Blu-Ray
Buy The Book

The DUFF references 1985 classic The Breakfast Club early on, stating the labels thrust upon Shermer High School students in that film are outdated. It’s a weird mention for several reasons. Part of the point of that movie was usurping the stereotypes of princess, criminal, basket case, et cetera; this was already done 30 years ago, and in a thoughtful way that’s still relevant. Also, it’s hard to point fingers when the title of your movie is an acronym for Designated Ugly Fat Friend. My, how far we’ve come.

The unfortunate soul saddled with that moniker is high school senior Bianca (Mae Whitman), who is neither ugly nor fat. She’s smart, dresses in flannels and overalls, and likes old horror movies, therefore: weirdo. Superjock, and Bianca’s next door neighbor, Wesley (Robbie Amell) tells her glibly not to take it literally and it only means that she’s the most “approachable” of her group of friends. Indeed, when walking the halls with BFFs, and classic beauty ideals, Casey (Bianca A. Santos) and Jess (Skyler Samuels), Bianca may as well be invisible. Accepting her role without much anguish or introspection, Bianca enlists Wesley to help un-DUFF herself in hopes of wooing longtime crush Toby (Nick Eversman). In exchange, Bianca will help Wesley pass Biology and remain eligible for the football team. Groan. It’s the most hackneyed of setups that plays out pretty much as you would expect.

Pleasantly surprising are the turns by Whitman and Amell, who sell the contrivances as if they’re in on a self-referential joke and add dimension to their characters. The script from Josh A. Cagan, based on the book by Kody Keplinger, is occasionally clever with lines delivered with gusto by a game cast, though it never fully transcends the tropes or shakes the inherently offensive and messy aspects of the premise. Everything is kept quippy without a lot of depth, and director Ari Sandel’s strategy for keeping things buoyant are quick scenes filled with on-screen titles, hashtags, and broad comedy, never pausing long enough for thematic examination. This gives potentially relevant issues – Bianca’s runaway father, Wesley’s unhappy home – less of a punch. Adults are generally just another layer of comic relief, with the reliable Allison Janney as Bianca’s mom and Ken Jeong as a compassionate teacher each having their moments.

With all of the clutter, The DUFF seems to forget, or even disregard, its own empowerment message. It glosses over serious issues like extremely hurtful cyberbullying and uses it as fodder for a comedic montage in which a huge public high school enlists teachers to collect all mobile devices. Yes, Bianca has a good cry after a mean-spirited video of her appears online, but then it’s quickly forgotten. Sticks and stones, I suppose, but we know better than that. Nothing is overcome; it’s just pushed aside to get to the jokes and the hollow feel-good inevitabilities.

The message is muddled throughout. There’s potential in the strained relationship between Bianca and Casey and Jess – who genuinely seem to care about their friend, but the two more statuesque members of the triumvirate disappear when the focus shifts to Bianca and Wesley. It could be interesting to get some perspective on the nature of a DUFF from both sides of the equation. Instead, the girls reunite only when it’s time to get Bianca all gussied up for the climactic school dance, where she can spout some clichéd catharsis and get the guy. There’s a strange feeling of duality permeating the proceedings, with various situations and characters rejecting and then subsequently buying into platitudes when it’s convenient. Stereotypical school bitch Madison (Bella Thorne) is one-note, but at least you know what you’re gonna get from her.

Borrowing from The Breakfast Club after calling it out, The DUFF uses a framing device in which Bianca is tasked with writing an essay about what the high school homecoming celebration means to her. Of course, she scoffs at first, and then comes up with something that would only be relevant in a glossy, sitcom fantasy. Whether or not you’re bothered by the flippant presentation of high school hierarchy and/or are amused by the moments of brevity, the impression left isn’t a lasting one. In the simplest terms and the most convenient definitions, The DUFF is utterly forgettable. 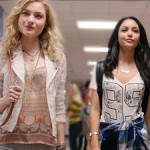 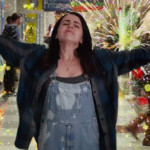 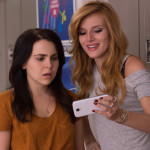