If you build a locker room...
Buy It From Amazon
Buy It On DVD
Buy It On Blu-Ray

If the real Cleveland Browns organization is run even remotely like the fictionalized version in Draft Day, then it’s no wonder why their team has been so bad for so long. That’s OK though. As a football fan I can accept the dumbed-down, trumped-up drama built around the NFL’s annual spring spectacle. As a moviegoer, however, it’s hard to accept how forced, and how bland, all that drama is. Draft Day weaves in several sports movie clichés – the underdog overcoming the odds, the last-second heroics, and so on – without featuring the actual playing of the sport. Much of the theater is staged on the phone or in conference rooms, and the wheeling and dealing of NFL execs depicted here is about as exciting as watching middle-schoolers trade football cards.

Browns general manager Sonny Weaver Jr. (Kevin Costner) is under a lot of pressure on draft day. Fans haven’t forgiven him for firing a beloved coach – who also happens to be his now deceased father, Sonny Senior. Team owner Anthony Molina (Frank Langella) wants to make a splash and new head coach Penn (Denis Leary) has his own ideas on which prospect to pick. On a personal level, Sonny learns his secret relationship with much younger Browns executive Ali (Jennifer Garner) has resulted in an unplanned pregnancy. He also has to manage an overbearing mother (Ellen Burstyn) who checks in from time to time to antagonize him, including an insistence on spreading Sonny Sr.’s ashes on the Browns’ practice field. With all of this going on, Sonny must make the ultimate decision on which college prospect(s) to pick to remake his team and repair his damaged reputation.

The role of embattled GM suits Costner well and feels like an evolution from his immature sportsmen in Bull Durham and Tin Cup, their machismo replaced with hesitation brought on by the responsibilities of being in charge. Problem is, his edges, and the edges of the film, have been smoothed into a dull melodramatic machine. A plaque in Sonny’s office quoting military strategist Sun Tzu, “Every battle is won before it is ever fought,” features prominently to remind us that the construction of a football team is super-important.

Director Ivan Reitman strains to find forward momentum throughout, using sweeping overhead shots of various empty stadiums and countdown clocks to set up the backroom action. Multiple split-screen phone conversations where participants break into each other’s space are meant to create tension, but just come off as desperate and gimmicky. A brief appearance from Sam Elliott as a hardnosed college coach on the other end of the line is the only confrontation that adds spice.

In general, the cast exists only to serve their specific role at any given time on draft day. Garner’s self-assured football expert solves every front office issue big and small. In case we don’t understand her indispensable role in the organization, she literally puts out a fire started by a disgruntled coach Penn. The players shown as potential draftees are mere generalizations – the cocky, can’t-miss quarterback, the running back who had a brush with the law, and the hard-luck, hard-working linebacker. Chadwick Boseman goes from playing one of the most important sports figures of all time (Jackie Robinson in 42) to playing a supposed-to-be-sympathetic player who lost a sister to cancer, but can’t stomach being picked lower than seventh in the draft for financial concerns. Are we really supposed to care that much about what degree of millionaire he becomes?

For all of Draft Day’s talking and posturing, it has very little to say. The pomp and circumstance of the NFL is merely used as a backdrop for tepid relationship drama and tired rhetoric about doing what you believe to be right. It also doesn’t even play by its own rules, telling us more than once that there are no sure things, but then expecting us to make assumptions of what happens after an undefined ending. Released one month ahead of the actual NFL draft, Draft Day is destined to be forgotten long before the name of the first pick is called. 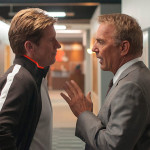 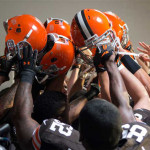 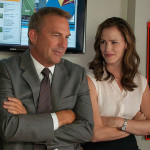