Why Don’t You Play in Hell?
By: Blake Crane

Prolific director Sion Sono’s Why Don’t You Play in Hell? sporadically feels like a heartfelt love letter to the cinema and filmmaking – one that’s inked in blood. For this particular tale, it would have been beneficial if Sono had used some shorthand. There’s plenty of cleverness — and brutality — splashed throughout, but the mayhem and merriment are undercut by long stretches of tedium.

It is commendable that the chaos of a yakuza revenge tale is blended quite seamlessly, and inventively, with a story of young filmmakers in a way that’s tough to describe but which is perfectly coherent in the moment. However, there’s a bit too much gear grinding for Hell to be the consistently engrossing, cheerful high-octane ride it could’ve been.

As young teens, a group of passionate guerrilla filmmakers calling themselves the F**k Bombers had designs of making masterpieces. Ten years after we first meet the crew, led by director Hirata (Hiroki Hasegawa), the film world – and the world in general – has left them behind. Their techniques haven’t evolved, they’re expert procrastinators, and their action “star” still walks around in the yellow and black tracksuit worn by Bruce Lee in Game of Death (or Uma Thurman in Kill Bill, if you prefer). One nice touch from Sono is correlating the stagnation of the F**k Bombers with the change from 35mm to digital film. The crew watches footage from their uncompleted movie in a shuttered movie house that bustled when they were kids; not on the big screen, but on a small TV sitting on the stage below it.

Meanwhile, yakuza boss Muto (Jun Kuniura) is looking for revenge against rival Ikegami (Shinichi Tsutsumi), whose attempt on his life a decade earlier earned his wife a prison sentence for taking out the assassins. He’s also looking to secure a movie career for wayward daughter Michiko (Fumi Nikaido), who starred in a popular toothpaste commercial as a child and recently walked off the set of a big production. When Muto decides to get in the movie business himself, a series of circumstances bring him into contact with the F**k Bombers, and he hires them to film a raid on Ikegami.

The title of the film, the high volume of bloody carnage, and the revenge half of the plot suggests shocking brutality, but Sono approaches the material with tongue firmly planted in cheek. Sarcasm and satire win out over the bloodletting, which is sometimes a good thing and sometimes wearisome during the arduous setup used to slowly bring Muto together with Hirata and his crew. That they’re joined by a stream of projectile vomit fits the cheeky callow of the film’s tone, though with so much of the immaturity based on chance there’s no need to linger on the development of characters and situations that don’t require it. The shorter bursts of juvenility work better, as when Ikegami demands his henchmen switch from suits to kimonos, or his fanboy admiration of Michiko and her toothpaste commercial.

Hell is best when it goes full-on meta, commenting on the joy (and pain) of cinema through the film and the films within the film. One scene juxtaposes Michiko interrogating a former lover against a similar situation in the production she walked out on. In Sono’s “real world,” the aspiring actress fills a man’s mouth with broken glass and kisses him until he chokes on his own blood; in the film-within-the-film, the femme fatale uses a boring old gun to the head. An acquaintance of Michiko tells her the glass kiss is the coolest thing he’s ever seen.

In many ways, the F**k Bombers are a filmic manifestation of Sono, the gleeful filmmaker overlord. They share his obvious passion, but clearly not his skill. They’re actually willing to die if it means they’re remembered for making a singularly unique movie. Hell isn’t quite that, though the enthusiasm with which it was made makes for bits of lasting imagery and dialogue.

The film opens with the toothpaste commercial and its catchy jingle is repeated throughout. That this remains the biggest earworm when the film concludes, despite all the disorder and an extended final act of madness, says something about the effectiveness of all the fussy ferocity.

The Why Don’t You Play in Hell? Blu-ray includes a press conference with director Sion Sono, an 11×17 foldout poster, 24-page booklet, theatrical trailers, and a digital copy. 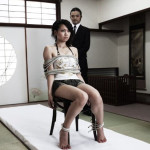 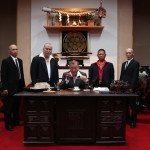 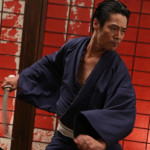