Smashed and Drab.
Buy It From Amazon
Buy It On DVD
Buy It On Blu-Ray

It’s a shame such a spirited performance from Jude Law is wasted in such an unpleasant movie. There’s potential in Dom Hemingway the sociopathic character, fueled by Law’s hyper boorishness, but Dom Hemingway the film doesn’t know what to do with him. It seems the strategy of writer-director Richard Shepard is to toss the brute into dull crime saga scenarios common in the late ‘90s post-Tarantino landscape and see what happens. The answer: not much. When the crude thuggery predictably runs out of steam, attempts at redemptive sentimentality don’t fare much better.

We open with a shirtless, incarcerated Hemingway offering a soliloquy on the beauty and power of his penis – not the word he uses, shouting about its virtues in a thick Cockney accent. The scene has a multi-layered climax. It’s a forced attempt to shock, setting a trying-too-hard tone that permeates the film. What follows is an obnoxious blur of broadly sketched characters spouting about criminal codes and circumscribed kismet as Dom over-imbibes, beats people up, and screams at everyone.

To be fair, he has reason to be surly. Dom, a safe-cracker by trade, is released after serving 12 years in prison for robbery. He’s eager to collect a reward from crime boss Ivan Fontaine (Demián Bichir) as penance for not giving him up to authorities. Joined by loyal partner Dickie (Richard E. Grant), Dom travels to Fontaine’s lush estate in the south of France to gather his nest egg and start over – presumably with an endless stream of hookers, booze, and cocaine. Unable to pacify his pent-up rage, Dom insults and lashes out at Fontaine, suggesting that he should also be given the boss’ woman (Mădălina Diana Ghenea) as a form of repayment. There’s no backlash from that outburst, but an accident caused by more irresponsible behavior forces Dom back to London minus any money or prospects. Back in his old stomping grounds, he begs for illegal work from Lestor (Jumayn Hunter), the son of his former rival, and begs his estranged daughter Evelyn (Emilia Clarke) for reconciliation.

The arc of the titular character has an incongruous, episodic feel – made worse by the tired practice of breaking up the action with chapter titles – that is more laborious trek than liberating journey. One moment Dom appears to have a spiritual awakening while admiring his daughter singing on stage, the next he’s involved in an unfunny protracted conversation with Lestor regarding the murder of a cat. There’s no delineation between Dom the thug and Dom the deep-down-inside softie, making both sides of his personality feel insincere. Law, chubbier and scruffier than we’re used to seeing him, is willing to destabilize his suave image, but his efforts are undermined by the screenplay’s limp mixture of ugly and sweet.

Try as Law might, he’s unable to break through the contrivances to arrive at anything genuine. He also doesn’t get any help from underwritten supporting characters that are given little to do other than react to, or be a means of setting up, his wacky antics. Bichir’s white suit and sculptured facial hair or Grant’s yellow-tinted sunglasses and prosthetic hand aren’t enough to add depth to their flimsy roles. As ostentatious as Shepard tries to be in the dressing of his characters or his sets – complete with oversized baboon portraits – he manages to reduce the larger-than-life personality at the center of his film to a small, flavorless scamp. 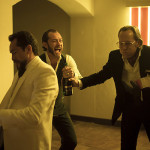 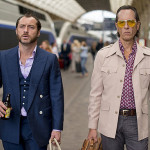 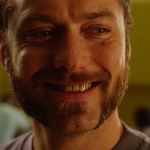