Digging for Fire
By: Norm Schrager

Gimme ten.
Buy It From Amazon
Buy It On DVD

After creating his loose brand of independent film for about a decade – including five features in the past three years – Joe Swanberg seemed poised to hit his apex with Digging for Fire. The cast is an indie fan’s delight, a giddy open call for any likable actor who’s ever been in one of Swanberg’s 17 films. And after 15 minutes, we have a solid setup for a Swanberg movie, with a little mystery and a taste of some relationship tension. But by the one-hour mark, Digging for Fire is brutally under-utilizing its cast and just sorta hanging around, a messy, disappointing no-man’s land.

It appears that Swanberg’s improvisational style – which I wholly enjoy, to the ridicule of peers who find it lazy – has finally bit him in the ass. Primarily because the premise of Digging for Fire demands more than the couple of basic notes that Swanberg’s actors usually build from in movies like Happy Christmas and All the Light in the Sky. Jake Johnson (who co-wrote the film with Swanberg) and Rosemarie DeWitt play young parents who stumble upon a human bone and an old-looking gun while sniffing around the backyard of a swanky home where they’re housesitting. He’s enthralled. To him, this is Indiana Jones territory. She is more concerned with a ladies night out and making sure her husband finally does their taxes over the weekend.

Okay, some facts: This plot has promise. This plot needs structure. Structure is not Joe Swanberg’s strong suit.

If the potential murder mystery element is just a diversion, its presence should drive something else. If it’s a metaphor (it may have been, I really can’t be sure), it deserves firmer direction. Stronger narrative. Some style. Anything.

But Digging for Fire just moseys along with some of the least satisfying freestyle of any Swanberg film. There are signs of life during an impromptu bro hangout that includes Johnson, Mike Birbiglia, Sam Rockwell, and Chris Messina. But the script is so non-existent that Messina, one of the best supporting players working today, has no dialogue. However, he does get to show his willie and make out with Anna Kendrick, so I guess that’s something.

Once playtime is over, anyone with the least interest in these actors – or even the thinly crafted characters – will expect something with a little more focus. Let’s see Johnson’s character go ape-shit-obsessed in the backyard, give him a little Roy Neary from Close Encounters. Or keep the yard shtick as one big McGuffin and make the movie all about the house party, as the fellas’ immaturity kicks in and the whole thing plays like a smarter version of This Is the End.

Instead, we spend a little more time in the yard and a few flat moments hanging out by the pool. There’s a possible detour concerning Johnson’s character and a woman played by Brie Larson, but it’s derailed by a strange, second Rockwell appearance (improv!). Even the wife’s night out falls into boy-girl movie cliché – without the slightest emotional push to draw us in.

There’s a fine line between letting it all flow and simply failing to commit to anything. Joe Swanberg wants Digging for Fire to succeed as the former, but it is positioned firmly, and uncomfortably, in the latter. Stuck, as it were, without a shovel. 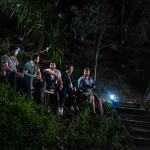 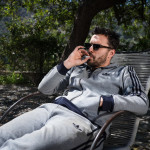 One thought on “Digging for Fire”