Despicable Me 3
By: Valerie Kalfrin

It's a hard-knock life.
Buy It From Amazon
Buy It On DVD
Buy It On Blu-Ray

The world’s worst supervillain turned secret agent and his Minions still whip up some laughs in Despicable Me 3, but this film could have been way more bananas.

I’m a fan of this franchise and its winsome impish streak. Gru (Steve Carell), who once stole the moon before adopting three girls who stole his heart, and his pint-sized helpers that resemble Twinkies in overalls often say or do things we can’t in polite company. Like swatting an overly inquisitive kid with a glittery fairy wand. Dropping off a blind date zonked with a tranquilizer dart. Saluting someone with a fart gun (of which I’m not a fan, but my seven-year-old son is).

But after two previous installments and one spinoff (Minions), the plot chemistry in Despicable Me 3 feels a bit flat. Children will love it (my son and his friend did), but adults might find themselves thinking too much about some real-world elements. One should never think too much around Minions.

Part of the problem is that the film separates Gru from his previously loyal yellow crew. (He’s a fine straight foil to their banana-loving shenanigans.) He and Lucy (Kristen Wiig), the secret agent that he met and wed in Despicable Me 2, lose their jobs at the Anti-Villain League in the first moments after 1980s-obsessed villain Balthazar Bratt (Trey Parker) escapes with designs on stealing a ginormous jewel. Then Gru learns that the twin brother he never knew existed wants to meet him.

Named Dru (and also voiced by Carell), this twin wound up with his late father after a Parent Trap-style divorce where the parents each opted to take a twin and keep the sibling a secret. Dru whisks Gru, Lucy, and their girls off to his lavish home, where he tells Gru that he wants to plan a heist together.

Meanwhile, the Minions, always more in love with the idea of villainy than capable of actual malice, decide they’ve had enough of being good guys and go on strike. They wind up on stage at a singing competition and wow the audience with a joyful gibberish version of “I Am the Very Model of a Modern Major-General” from The Pirates of Penzance. (There’s a karaoke version available online if you’d like to try to keep up.)

Somehow, this lands the lot of them in a state prison, complete with black-and-white striped uniforms. No doubt the film’s creative team—which includes returning writers Cinco Paul and Ken Daurio and director Pierre Coffin—thought it might be funny to see the Minions run the place. But the former crime reporter in me thought this was one heck of a time out for trespassing.

“I miss the Minions,” Gru says at one point. I missed them and Gru’s family together, too.

Speaking of Gru’s family, the film also struggles to give Lucy and the girls something to do. Agnes (Nev Scharrel), the youngest, still has adorable moments. But Lucy deferring all the parental talks to Gru, saying she’s not used to this mom stuff, doesn’t do the character any favors. She’s a natural whenever she lets her overzealous agent instincts take over, like decking everyone in sight when Agnes screams with glee and Lucy mistakes it for trouble.

Despicable Me 3 is not a despicable time, just not as loony as we’ve come to expect. 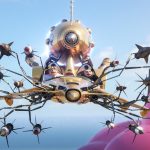 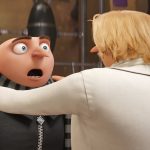 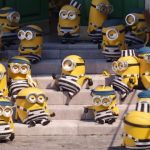 One thought on “Despicable Me 3”