The Death of Louis XIV
By: Paul Brenner

So far the best film of 2017 concerns the dying, rotting carcass of the French Sun King and the most suspenseful moment in the film is when the king manages to digest a cracker. Director and co-writer Albert Serra’s The Death of Louis XIV is an 18th century version of a 48-hour stay in the observation wing of Mount Sinai Hospital, only instead of charting the illness of a methadone addict, the film takes on, with a detached and icy perspective, the death throes of France’s longest reigning monarch (a 72-year reign from Louis XIV’s ascension at four-years-old until his death in 1715) as the king’s gangrenous leg goes from bad to worse and his retainers hover over him trying to halt the king’s deterioration. And playing the legendary Sun King is an equally legendary film legend, Jean-Pierre Léaud, whose lordly grumbles and snarls turn the film into more than a meditation on a dying king and into a meditation on the dying art of cinema.

Albert Serra’s previous works (Honor of the Knights, Birdsong, The Story of My Death) all deal in stories of the mundane, as great historical and literary figures are brought low by the banal, revealing the humanity of the great. Serra expands minimal actions – Louis XIV trying to walk, swallowing water and chewing food, having salve applied to his gangrenous leg – into major sequences. At one point in the film, the king’s managing to swallow some food elicits triumphant applause from the figures crowding around his deathbed.

Serra’s style is somber, stately, painterly and clinical. Figures are garbed in black, hovering in shadows, with the dying candlelight hovering over Louis XIV as the only light source. Serra owes much to Roberto Rossellini’s The Taking of Power of Louis XIV and Stanley Kubrick’s Barry Lyndon. Serra’s cool, detached style owes a lot to Barry Lyndon only without the slow zoom shots. Although the film is confined to the king’s bedchambers, the film is like Kubrick’s film in its flowing and beautiful ornateness. Reflecting Barry Lyndon’s closing one-liner (“They are all equal now”), The Death of Louis XIV has its own great closer – “Gentlemen, we will do better next time.”

And then there is international film icon Jean-Pierre Léaud, consuming the role of Louis XIV like the gangrene in Louis XIV’s leg. Léaud  is the physical embodiment of the French New Wave, and starred in Truffaut’s Antoine Doinel series (The 400 Blows, Antoine and Colette, Stolen Kisses, Bed and Board, Love on the Run), Godard’s Weekend, Masculin-Feminin, La Chinoise) and seminal films by Jean Eustache, Pier Paolo Pasolini, Bernardo Bertolucci and Jacques Rivette. In Léaud’s previous roles, Léaud hit his parts full tilt in a life-affirming unrestraint that was beyond acting. In David Thomson’s backhanded compliment, Léaud “works . . . hard as if he were an actor.”

But here as Louis XIV, Léaud’s mannerisms are shut down and he has to work reclining across the frame, immobile on his death bed, restricted to minimal expression and stares. But Léaud distills a half-century of film work into tiny gestures and reactions. Louis XIV grandly salutes well-wishers with an elaborate blue hat that is quickly removed. He screams for water but refuses the glass because it is not made of crystal. In a great long take, Léaud’s Louis XIV is seen in extreme close-up, barely mobile, almost like an elderly version the famous freeze frame that ends The 400 Blows, as he listens emotionally as Mozart plays in another room at the palace. And no one but Léaud can deliver lines as charged as “I can’t swallow anymore. Everything revolts me” and “This leg. It stinks. I want to vomit.”

Will someone at the Academy of Motion Picture Arts and Sciences please finally give Léaud an honorary Oscar? At the end of The Death of Louis XIV when Louis XIV dies the Sun King takes sixty years of French cinema with him. 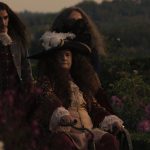 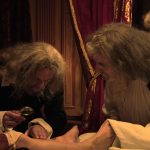 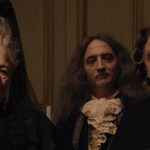