He's Gotta Have It.
Buy It From Amazon
Buy It On DVD
Buy It On Blu-Ray

Everybody knows Spike Lee. Spike Lee and his “joints” are brand names like Tide, Dockers, and Sinatra. For almost thirty years, Lee, through artistry and self-promotion, has made himself the preeminent American filmmaker of what used to be called “the Black Experience in America.” Lee has touched on every subject – racism (Do the Right Thing), narrative biography (Malcolm X), nostalgia (Crooklyn), searing documentaries (4 Little Girls, When the Levees Broke), hits (Inside Man), flops (Girl 6), and even concert films with Stew, Mike Tyson, and Steve Harvey. A college history course can be designed with Lee’s films alone. But Lee has been a contradictory filmmaker. One the one hand, Lee always looks to be on the cutting edge. On the other hand, Lee seeks to be a middle-of-the-road popular artist. Lee has always walked a fine line of subversion and commercial success – America’s Dario Fo.

In his new film Da Sweet Blood of Jesus, Lee joins the hipster vampire genre (keeping pace with his contemporary Jim Jarmusch). Dr. Hess Greene (Stephen Tyrone Williams) is a filthy rich anthropologist who, after being stabbed by an ornate dagger from the Ashanti Empire, becomes a member of the undead. In order to survive, Hess has to slurp up the blood of his victims, which, in this case, are lower class African Americans (a hooker, a poor mother with an infant). If you extrapolate this vampire tale to the world of filmmaking, this well may be Lee’s most personal film.

The film is about addictions and a parable concerning the assimilation of black culture into the pop bankruptcy of American culture. This is also the theme of the film that Lee based Da Sweet Blood of Jesus on, Bill Gunn’s incendiary 1973 Ganja and Hess. Gunn’s film is raw and ragged while Lee’s film is mannered and burnished. Da Sweet Blood of Jesus follows Gunn’s film almost exactly (excepting a few character switches). Even the dialogue at some instances is the same (for example, when Hess discovers his colleague hiding up a tree on his estate and threatening to hang himself, Hess in both versions remarks, “I’m the only colored on the block so when a black man washes ashore, they come to me for questioning.”).

But Spike Lee is still Spike Lee and the film is replete with Lee-isms. The first scene takes place at “The Museum of the Republic of Brooklyn.” Hess’s Martha’s Vineyard estate is 40 acres. And there is a rant about Bucky Dent and Bill “Fuckin’’ Buckner. But the film doesn’t stray too far from Ganja and Hess and is far less strident than many of Lee’s films.

Da Sweet Blood of Jesus was financed through a Kickstarter campaign that raised $1.25 million. It’s low budget but the film looks great. Daniel Patterson’s cinematography is stunning with magnificent widescreen compositions. Lee’s use of color is eye-popping. When Ganja (Zaraah Abrahams) appears in red, your eyes begin to melt.

Where Da Sweet Blood of Jesus takes flight is in two dynamic, energizing musical numbers. One is in a church with a gospel song that raises the roof and even convinces Hess to give himself to Jesus and forget about eternal life. The other is the opening credits sequence, reminiscent of the Rosie Perez opening of Do the Right Thing – L’il Buck dancing through a collection of choice New York locations. Reflecting Lee’s love of Hollywood musicals, the sequences sing and pulse like the rest of Da Sweet Blood of Jesus does not. They are from another movie, a movie Lee has it in him to do – a good, old-fashioned musical. Forget Baz Luhrmann. Spike’s the Luhrman, only he don’t know it. 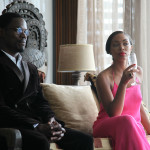 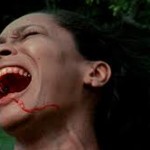 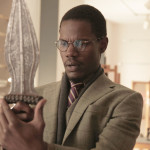