Curse of Chucky
By: Blake Crane

The last decade or so has seen a rash of horror icons get the reboot treatment. Jason Voorhees, Freddy Krueger, Michael Myers, and Leatherface have all sliced and diced their way through slick yet lackluster remakes that brought some gore but none of the gritty spirit or dark wit of the originals. Now devious doll Chucky gets his shot at revival nearly a decade after 2004’s campy and horribly received Seed of Chucky.

A return to the harsh horror roots of the franchise, Curse of Chucky isn’t a straight-up reboot as the direct-to-video offering recognizes the canon of the series, though it starts off fresh with a new family served up as victims. After floundering through a weak setup, the film goes backwards in an attempt to tie this new chapter into the murky mythology of Chucky that began 25 years ago. It’s stuck between trying to do its own thing and trying to appease aging fans of the series, resulting in a completely middle-of-the-road experience that spins its wheels in the puddles of blood pooling on the floor.

A package arrives at the deteriorating Victorian home of paraplegic Nica (Fiona Dourif), who lives with her overprotective mother.  Someone for some reason has shipped them Chucky, whom they completely disregard and toss in the corner. That very same night Nica’s mom “commits suicide,” her very bloody death bringing Nica’s sister Barb (Danielle Bisutti) and her family back home. Barb’s daughter Alice (Summer Howell) quickly takes a shine to the ginger-haired Good Guy doll, carting him all around the house. Her family shrugs off Alice’s assertions that Chucky speaks to her with strings of foul and concerning language, but things get serious when the doll springs into murderous action on a dark and stormy night.

While Curse of Chucky doesn’t look cheap, writer/director Don Mancini, attached to the series since the beginning, is hamstrung by a limited budget. 90 percent of the film takes place in the one home, which wouldn’t necessarily be a bad thing if there were something inspiring with the architecture of the action. Scenes jump from room to room and hallway to hallway without any real craft. Chucky and his victims appear where and when needed to routinely work through the fatalities list. There’s also a jarring difference in the animatronic dolls used for the production. The static unexpressive Chucky is so different than the one used for human manifestations, any tension is zapped when we see the change from one shot to the next. It’s obvious when the jump-scare Chucky appears on screen.

There are a few interesting angles taken by Mancini. Having a paraplegic as the protagonist evens the playing field a bit during her attempts to crawl away from a two-foot-tall psychopath. It’s also fun to hear the cackle of Brad Dourif (lead actress Fiona’s father) back behind the plastic scowl of Chucky, with a few of his trademark, maniacal one-liners hitting their mark.

Any momentum from the few bright spots of Curse of Chucky are lost between a first act that takes too long to establish a rhythm – including an extended dinner scene involving a single poisoned bowl of chili with a weak payoff – and an anti-climax that muddles the mayhem with too much backstory. There’s nothing here to indicate that the current iteration of Chucky contains enough life to stalk though anything more than a string of middling direct-to-video sequels. 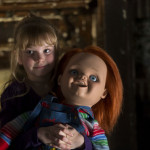 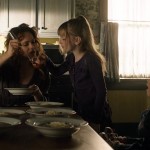 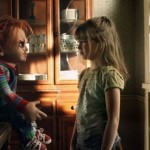 One thought on “Curse of Chucky”