Should've paid PG&E.
Buy It From Amazon
Buy It On DVD
Buy It On Blu-Ray

Are you a fan of Dark Shadows? No, not the Johnny Depp disaster from a few years back, but the original ABC soap opera from the early ‘70s. Dan Curtis’s desire to bring horror to the masses via reconfiguring the classic Gothic romance may have made for a questionable daily serial, but it did succeed in finding a new and unique way of reinvigorating a moldy genre standard. The same thing can be said for king geek Guillermo Del Toro’s latest, Crimson Peak. More sumptuous than scary but boasting a brilliant cast, Curtis would be proud. So would the heroes at Hammer, and any other purveyor of paranormal passion from the past.

Yes, the plot is predictable, especially for anyone who’s a fan of this kind of movie. And if you are a fan of Del Toro, you can also anticipate many of his standard cinematic moves (the fairytale story structure, the unsettled spirit, the allusions to bigger picture ideas). But instead of delivering an experience in terror, the filmmaker finds a happy medium between several types. The result is a standout in his canon, an attempt to take his game to a whole new level that succeeds smashingly.

When Edith Cushing was young, tragedy struck. Since then, the now adult (Mia Wasikowska) has been obsessed with the paranormal, and more specifically writing about it. While fending off the friendly advances of Dr. Alan McMichael (Charlie Hunnam), she becomes taken with a British dandy named Sir Thomas Sharpe (Tom Hiddleston) who sweeps her away to his English manor. Known for the blood red clay that frequently seeps to the surface, the property also houses a bunch of secrets and the equally mysterious Lady Lucille Sharpe (Jessica Chastain), Thomas’ sister. It’s not long before Crimson Peak’s haunted past comes to take its terror out on Edith, threatening her marriage, and her life.

If mood in movies could earn an Oscar, Crimson Peak’s atmosphere would earn a whole entire crumbling estate’s worth of prizes. From the production design to the costuming, this film gives new meaning to the terms “lush” and “baroque.” Del Toro is nothing if not a stickler for detail and this movie feels lived in, not just looked over. Every inch of the Sharpe home is a study in artistic aspiration. You can almost smell the mildew, the damp digging deep into your skin. That the movie provides limited fear doesn’t defeat the greatness in other areas where it manages to succeed.

In fact, selling this film as anything other than a Victorian bodice-ripper with terror undertones is unfair to both the actors and their guide. Everyone does sensational work here, so if you go in expecting something that will keep you up at night, you’ll be sadly mistaken. Del Toro cribs from himself a bit, the main ghost looking “scarily” similar to the spirit in the movie he helped produce, Mama, but the rest of the frights quickly undermine such familiarity. Instead, the fear finds an anchor in the folklore like plot. This is first and foremost a (doomed) love story. The ghost parts are just subtext.

There are bound to be those disappointed in what Del Toro is doing. They are more interested in gore and blood than subtlety and storytelling. Again, there is nothing new about what Crimson Peak wants to accomplish. Older members of the demo will get it right away. As for a new generation, raised on J-Horror, torture porn, and PG-13 remakes of classic fright films (and all the variables in between), this will either be a revelation or another reason to give up on the Mexican madman all together. Actually, it’s worthy of rejoicing. While overly familiar, Crimson Peak is still one fascinating creep show. 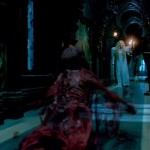 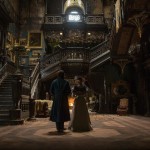 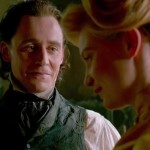