What was I saying about Adrian?
Buy It From Amazon
Buy It On DVD
Buy It On Blu-Ray

There are a few key dramatic moments in Creed when Bill Conti’s iconic Rocky score kicks in, but it’s only for a note or two before morphing into something that sounds similar, but fresh. The musical cues are emblematic of director/co-writer Ryan Coogler’s skillful continuation/offshoot of the Rocky saga. He sticks to the familiar formula of the series’ best two films – the original and 2006’s Rocky Balboa – and updates the underdog struggle by investing in characters both established and new. Simultaneously crowd-pleasing and powerful, Creed hits the right tone and makes us care about the pugilism by making us care about the pugilists first.

Michael B. Jordan plays Adonis Johnson, the product of an extra-marital affair of former world champ Apollo Creed (Carl Weathers, appearing in archive footage). Saved from a life in foster care and juvenile detention by Apollo’s widow (Phylicia Rashad), Adonis lives comfortably and has a good job, but boxing is in his blood. After winning several unsanctioned bouts in Mexico, Adonis trades his SoCal mansion for a studio apartment in Philadelphia, moving to the city in hopes of getting Rocky Balboa (Sylvester Stallone), his father’s former rival and friend, to train him. The Italian Stallion eventually takes on Adonis as his pupil, and as he trains the young boxer for the ring Rocky is faced with a serious battle of his own.

Despite the presence of training montages and occasional lines of dialogue like, “I fight, you fight,” Creed is much more than a string of clichés building to a climactic prizefight. The sappiness is swallowed up the by the authenticity, with settings from the Tijuana backroom arenas to the cold streets of Philly feeling real and helping to shape the up-and-coming Adonis. Of course there’s also “a girl.” While at first it seems mighty convenient that Adonis moves in directly above the beautiful, vivacious, talented singer Bianca (Tessa Thompson, livening every scene she’s in), the blossoming romance is more than a plot requirement. Well-written exchanges between the couple turn them into actual people and not a forced pairing.

Like many recent boxing films, realism is also achieved by using recognizable sports commentators from HBO and ESPN. For sports fans, it’s kind of neat to hear contemporary broadcasters speak of movie legends Rocky Balboa and Apollo Creed as if they were real figures in sports history. (The illusion is sort of blown with the SportsCenter ticker that reads, “Rousey Dominates Again,” but it’s too late to change that now, I guess.)

Re-teaming with his Fruitvale Station director, Jordan projects just the right amount of swagger mixed with suppressed anger and anxiety. Adonis is confident in his skills and hesitant to use his father’s famous surname, partly because he wants to earn what he achieves and partly out of residual rage at his father’s actions and absence. The internal struggle is real. In his seventh turn as Rocky, Stallone captures the loveable lug sweetness of the character and also the credibility in Rocky’s advice and the truthfulness of his emotions. He’s funny, vulnerable, wise in his way, and totally genuine.

Coogler smartly takes his time with the trainer-boxer relationship and builds it brick by brick. In an early scene, Adonis shadowboxes to a projected image of Rocky and Apollo’s second fight, throwing blows in the direction of his father. When Adonis’ cover is blown and his last name leads to a cash-grab title fight with a disgraced champion, there’s an interesting juxtaposition in how Adonis and Rocky got their shots. Rocky was a no-name local brute, while Adonis is only a last name without an in-ring resume. Everything is done with a focus on building the meaning behind the sparring.

Though not the sole focus of Creed‘s drama, the two major bouts are shot with amazing energy. The first is a seemingly continuous shot that follows the action from the center of the ring to the corner between rounds and back again. The final fight brings back series iconography and a familiar structure, but also focuses on some of the ugliness of battle with close-ups of cutman tools, and puddles of sweat and blood. Jordan definitely has the look of a guy who trained hard for the role and appears to belong in the ring opposite real-life boxers Tony Bellew and Gabe Rosado. Again, the struggle feels real, which makes it all the easier to recoil and cheer at the desired moments and to be invigorated by both the hype and the humanity. 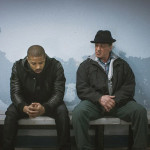 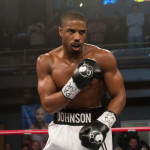 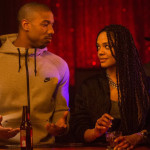